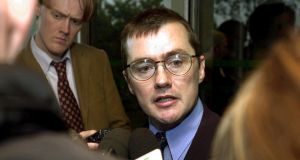 Willie Walsh, the then chief executive of Aer Lingus speaking to members of the press in 2001 on the day a restucturing plan was announced with the loss of over 2000 staff jobs. Dara Mac Dónaill/The Irish Times

News that Willie Walsh is stepping down as chief executive of Aer Lingus owner IAG won’t have come as a surprise to most people, given that he recently indicated he intended to go in the coming years.

Questioned by journalists in early November, he made it clear he intended to retire before his 60th birthday in October 2021. Back in 2011, he told The Irish Times he would ideally like to retire at the age of 55.

However, though well signposted, there is no doubting the 58-year-old will be missed both at IAG and more widely in the industry if he does indeed retire and to quit the sector altogether.

The man was dubbed a “miracle worker” for the work he did in bringing Aer Lingus back from the brink of collapse to profitability by slashing its workforce and repositioning the airline as a low-cost carrier. As head of British Airways and subsequently International Airlines Group (IAG), the parent company of Aer Lingus, British Airways, Iberia and Vueling, he has been no less impressive.

“It has amongst the highest returns of any network airline and is, in effect, a cash machine, having returned €4.1billion to shareholders since 2015.”

The Dubliner has had a long and illustrious career in the airline sector since joining Aer Lingus as a cadet at the age of 17. While working as a pilot for the carrier, he beefed up his credentials by obtaining a Master’s degree in management and business administration, before joining management.

He quickly moved up the corporate ladder at the carrier, holding a number of positions, including chief executive of the subsidiary Futura in the late 1990s. He rejoined the parent a few years later as chief operating officer before becoming chief executive in 2001 at the age of 39.

Having turned the airline around, in 2004, Walsh and two other senior executives – Séamus Kearney and Brian Dunne – expressed an interest in putting together a buyout of the then State-owned airline. The proposal was publicly slapped down by then taoiseach Bertie Ahern.

Walsh left Aer Lingus after the take-private offer was spurned and joined British Airways in 2005, taking over from Rod Eddington as chief executive.

Following its merger with Iberia in early 2011, he became chief executive of the new overarching holding company IAG (International Consolidated Airlines Group). In 2014, he returned to wooing the Irish government as the company sought to acquire Aer Lingus in a €1.4 billion buyout that was given the thumbs up the following year.

At that time, Mr Walsh promised that Aer Lingus customers would benefit from the deal with more routes to and from Ireland, and better connectivity through IAG’s network. With more transatlantic flights being added in recent years and prices being kept relatively stable, most customers would likely agree that he has kept to his promises even as IAG has become a force capable of taking on the likes of Air France-KLM and Lufthansa.

What happens next for Aer Lingus under incoming chief executive Luis Gallego remains to be seen but there will be concerns that it won’t necessarily be as central to the company’s plans as it has been under Mr Walsh.

1 Guinness brings out a non-alcoholic version of the black stuff
2 How much will a Covid-19 vaccine cost?
3 How long can Government afford to keep State pension age at 66?
4 How on earth do we the calculate the cost of Level 5 for the Irish economy?
5 Donohoe said delay to local property tax reform was ‘untenable’ before deferring it
6 Farm lobby seeks EU ban on vegan ‘burger’ and veggie ‘sausage’
7 Frank Fitzgibbon stepping down as Sunday Times editor
8 Ulster Bank tells ‘deeply concerned’ Minister no decision yet on future
9 Goldman Sachs to pay record $2.3bn foreign bribery penalty in the US
10 Pepper Money retreats from Irish lending market, citing ‘challenging conditions’
Real news has value SUBSCRIBE