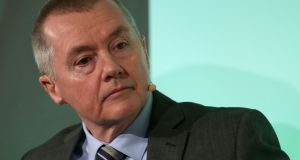 Dubliner Walsh forged IAG by merging British Airways with Spain’s troubled flag carrier Iberia in 2011, adding Barcelona-based Vueling the following year and Aer Lingus, where he was once chief executive, in 2015.

Along the way it absorbed British Midland International and developed a considerable cargo business. Later this year, it will take over another Spanish player, Air Europa, for €1 billion.

IAG flies more than 113 million people a year while its airlines’ networks span Europe, north and south America and Asia, through hubs in Heathrow, Madrid and Dublin.

Aer Lingus has added seven transatlantic routes with IAG’s backing since the group bought it for €1.4 billion in 2015. Industry observers do not believe Walsh’s retirement in June will change this.

Mark Simpson, airline analyst with stockbroker Goodbody, pointed out that by naming Iberia chief executive Luis Gallego as the Irishman’s successor, IAG was signalling that it intended following the same route as that plotted by Walsh when he put the group together.

“The critical thing is that the plan for Aer Lingus is embedded in IAG’s fleet plan, that’s obviously long-term,” Mr Simpson said.

Aer Lingus is buying nine Airbus A321 long-range (LR) aircraft that it will use to open further new routes between Dublin and the US and Canada.

The Irish airline’s strategy of selling the Republic’s biggest airport as a hub for travellers flying between Europe and north America prompted IAG’s original December 2014 bid for the company.

Walsh used his knowledge of how Irish business and politics interact to steer negotiations, allowing IAG to do the deal the following September, despite scepticism from TDs, trade unionists and Aer Lingus workers. The bid also had to satisfy rival Ryanair, which owned 29.9 per cent of Aer Lingus and had several times tried to buy it.

To convince the government to part with its 25 per cent stake in Aer Lingus, IAG guaranteed that its Irish subsidiary would continue flying from Cork, Dublin and Shannon to Heathrow until 2022, maintaining what were considered vital links with the London hub.

He swapped the cockpit for the corner office, rising to become the airline’s chief executive in 2001

Davy analyst Stephen Furlong noted that Aer Lingus is now IAG’s top performer in terms of the return on investment, which delivers €1.22 to the Irish carrier’s owner for every €1 it puts into the business.

He described this as “phenomenal” in airline terms and argued that as long as Aer Lingus continued to perform, its expansion would continue. Furlong explained that Walsh built IAG on the principle that the group would invest in its constituent airlines on the basis of their performance.

The only change he foresees is a new focus on Madrid, following the Air Europa transaction, which will allow the group to build its business on the south Atlantic.

Walsh began his career as a pilot, joining Aer Lingus as a trainee 40 years ago. He swapped the cockpit for the corner office, rising to become the airline’s chief executive in 2001, while aviation was in crisis following the 9/11 terrorist attacks on New York’s World Trade Center.

He left for British Airways in 2005, a year after he, chief financial officer Brian Dunne and chief operations officer Séamus Kearney told the government they wanted to find an “investment opportunity” for Aer Lingus. That was widely seen as a takeover bid, although Walsh says it was to get privatisation on the table.

His move to British Airways allowed him to practise what he preached about the need for European airlines to consolidate. Investors have backed Walsh, but workers, politicians and sometimes passengers have not always been happy with the changes he has made. However, Walsh himself said recently that he could not take credit for his achievements if he was not prepared to “take the abuse as well”.