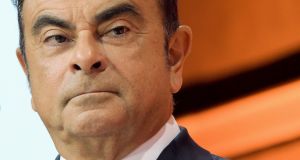 Despite being one of the world’s most-recognisable executives, former Nissan chairman Carlos Ghosn probably embarked onto a private jet from a quiet lounge in Japan’s third-largest airport on his astonishing escape from a fraud trial.

Somehow, Ghosn appears to have passed immigration and luggage checks before a flight to Istanbul from Kansai International Airport in western Osaka city, the plane’s owner said, becoming one of the world’s best-known fugitives.

Details remain shadowy, but one employee of Turkish operator MNG Jet has admitted not including Mr Ghosn’s name in official documentation, the airline said.

“He would have had to go through as a passenger, perhaps in disguise,” airport spokesman Kenji Takanishi told Reuters, amid multiple conspiracy theories over how Mr Ghosn pulled off his exit.

The slightly built Nissan boss does have experience in disguises: when first released on bail in March, he walked out of the detention centre disguised as a workman to avoid media.

After landing in Turkey, Mr Ghosn, who faced trial in Japan for financial misconduct charges that he denies, switched planes and flew on to his childhood home Lebanon. His escape capped a year-old saga shaking the global auto industry.

Even so, it remains a mystery how Mr Ghosn, who holds French, Brazilian and Lebanese citizenship, was able to orchestrate his departure despite being under strict surveillance by Japanese authorities, with movements and communications curtailed.

Private jet owners pay 200,000 yen (€1,659) to use the facility in Osaka, where normal immigration and baggage procedures apply. Luggage too large for the X-ray scan is opened and examined, Mr Takanishi said, meaning it was unlikely Mr Ghosn could have been smuggled on board.

Yet immigration officials have no record of him leaving, public broadcaster NHK has reported.

“I think I would recognise Ghosn if I took a good look at his face, but we don’t really look at people’s faces,” said a security guard at the private gate.

“It would be harder to spot him if he was wearing a disguise or was in a group.”

One airport official, who also declined to be identified, said airlines often outsource security and luggage checks to private security companies in Japan, unlike other countries where government or military officials normally do them.

Outside the terminal entrance, a dedicated parking lot stands less than 100 metres away, allowing a degree of privacy not afforded to commercial jet passengers.

Security staff had all heard the reports that Mr Ghosn flew out under their noses. But they were trying to avoid talking about it given the potential blow to pride. – Reuters