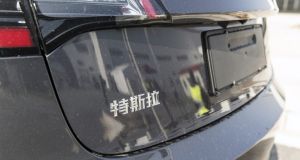 Tesla stock gained about 26 per cent over the course of 2019.

Tesla’s price target was raised by more than $100 at Canaccord Genuity, which wrote that the trend toward electric vehicles “will only accelerate in 2020”.

The target was raised to $515 from $375, one of the highest on Wall Street and near the Street-high view of $530. The average price target is about $302, according to Bloomberg data.

The move comes ahead of Tesla reporting fourth-quarter delivery numbers next week. Canaccord analyst Jed Dorsheimer, who reiterated a buy rating on the stock, expects the data will validate the trend of higher electric-vehicle adoption.

“While bears have feared demand issues as a function of tax credit expiration for Tesla, we suspect a solid fourth quarter combined with the robust third quarter should put these fears to rest,” he wrote to clients. He expects Tesla will report nearly 369,000 units delivered over 2019, above the company’s own guidance of 360,000.

Shares of Tesla rose 1.7 per cent in pre-market trading. The stock gained about 26 per cent over the course of 2019 and recently surged to record levels.

Canaccord was not the only firm to start the new year by expressing optimism about Tesla’s 2020 delivery prospects. JMP Securities wrote that “unit consensus expectations for this year are oddly low”. Analyst Joseph Osha speculated that the consensus didn’t reflect a contribution from Tesla’s Shanghai facility. – Bloomberg

1 Getting out from under ‘never-ending’ Celtic Tiger debt burden
2 Brittany Ferries ends Cork-Santander route
3 Pensions: Estonia plans to unleash a potential €4.85bn on economy
4 Explainer: what is the row about SF’s multinational tax plan?
5 Election 2020: Parties' pledges on housing simply don’t add up
6 Britain after Brexit will not be alone, but it will be lonelier
7 Banks withdrawing from ATMs – another failure of regulation
8 Fair Deal nursing homecare leaves little for bills and gifts
9 Luca de Meo named chief of French carmaker Renault
10 Accumulated profits at Kathryn Thomas’s media company rise to €420,000
Real news has value SUBSCRIBE