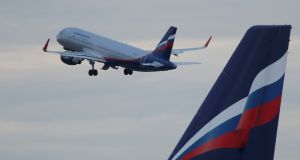 Senior Aeroflot management are expected to fly to Dublin for a reception to launch the Moscow-Dublin service. Photograph: Maxim Shemetov/Reuters

Aeroflot, the Russian state-controlled airline, is to launch a direct daily flight from Moscow to Dublin from October in a move which is hoped will greatly boost trade and tourism between the two countries.

A source at the flagship Russian carrier said the Airbus A320 service would commence on October 28th as part of its new winter schedule. The flight will leave Moscow’s main Sheremetyevo airport at 7.20pm, with an arrival in Dublin at 8.45pm. The return leg will depart Dublin at 7.20pm and arrive back in the Russian capital at 5.00am.

Tickets are already on sale on Aeroflot’s website starting at €127.69 one-way for an economy saver rate, which includes a meal and a drink. Business-class tickets start from €654 one-way.

The aircraft will be supplied by GTLK Europe, the Kremlin’s Dublin-based leasing arm, which has a portfolio of $1.5 billion in assets based out of Ireland. GTLK, which has raised $1 billion in financing in Ireland over the past two years, says Aeroflot is already its biggest client.

Senior Aeroflot management are expected to fly to Dublin for a reception to launch the service. Alexander Bogachev, former head of procurement for the airline, is understood to have been working with Enterprise Ireland to bring the Russian carrier to Dublin.

Irish government agencies have been lobbying hard in recent years to secure a direct flight to Moscow and will be hoping it helps a recent rebound in trade with Russia, which was badly affected by sanctions over the Kremlin’s interference in the Ukraine conflict.

S7, the privately-owned Russian carrier, currently flies once a week to Dublin during the summer months.

Aeroflot previously used Shannon as stopover to the United States and the goal in Government circles is that an Irish airport can once again become a Russian aviation hub.

In 1978, Aer Rianta approached Aeroflot with a proposal to store Soviet aviation fuel at Shannon for use on the Soviet airline’s transatlantic services.

By the early 1980s, more than 1,000 Aeroflot flights a year were clocked through Shannon as the Russian carrier routed other transit flights via Ireland.

Aer Rianta’s co-operation with Aeroflot led to the opening of a string of duty-free shops in airports in Moscow and St Petersburg.

The refuelling at Shannon ended after Aeroflot acquired longer-range aircraft, while the 1998 rouble crash and default by the Russian government forced most of the Irish community to abandon Moscow.

An Aeroflot source rejected rumours that the airline needs an Irish stopover as a hedge against potential US sanctions. The company’s shares plunged 12 per cent on Thursday after the US state department threatened sanctions that could ground all of its flights to the US.

Aeroflot, which says its classic Soviet emblem of a winged hammer and sickle now represents a smile, has undergone a transformation in recent years and has won several top industry awards for its service.

Its fleet is among the youngest in Europe, its business class is considered excellent, and it has sent its cabin crew back to school to learn to smile.

The company has also been a leading sponsor of Manchester United and the team’s official carrier since 2013.

Pobeda, Aeroflot’s budget airline subsidiary, received permission in July from the Russian aviation regulator to fly directly from Dublin to Moscow four times a week. Pobeda has previously secured the rights to fly to London and several other European destinations but has not yet exercised them.