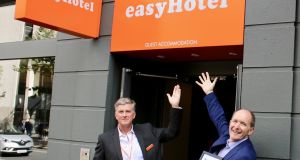 The first super-budget EasyHotel in Ireland has opened ahead of schedule in Belfast and has become the first hotel in the North to allow guests to unlock their room using a smartphone without even having to check in first.

The North’s newest hotel, which is part of the EasyGroup founded by Stelios Haji-Ioannou, has 81 bedrooms and will operate “just like budget airlines”, with everything done online or on a mobile app.

The team bringing the brand to Ireland, David Crowe from Holywood who has invested £5 million (€5.6 million) in the project and director Kevin Baird from Belfast, had initially run into a problem because of the proposed size of some of its bedrooms.

Legislation in Northern Ireland requires that double rooms in hotels must be a minimum of 13sq m and there was speculation that some of the rooms in the EasyHotel would not meet this requirement.

The hotel, which has received a guest accommodation certification from Tourism NI, was scheduled to open next month but opened for business on Monday on Howard Street in the heart of the city, just a few minutes’ walk from Belfast City Hall.

According to Mr Crowe and Mr Baird their ambition is to give tourists and visitors more choice to enjoy Belfast.

Mr Baird said: “With so much new accommodation on the market in the last number of months, EasyHotel guest accommodation offers a modern, stylish and highly affordable alternative.

“Belfast is filled with historic pubs, fine restaurants and cultural hotspots, from museums to architecture. Our aim is to champion tourism in Belfast by offering a central base for tourists to explore the city.”

Rooms start at £26.99 (€30) for a double room and the range of accommodation includes family rooms and ones that cater for people with disabilities.

The developers have also opened a coffee shop at the entrance of the hotel and hope their new venture will create 30 jobs.

“With strong early momentum in bookings, it will be exciting to see how we will progress from here. Hopefully this is only the beginning for the EasyHotel brand in Ireland,” Mr Baird said.