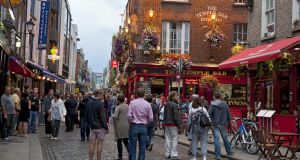 Temple Bar area: Irish Tourist Industry Confederation fears a “no deal” Brexit could cost Irish tourism up to €260 million in 2019.

The tourism industry has called for an extra €50 million to be allocated annually to the State agencies Fáilte Ireland and Tourism Ireland.

In its pre-budget submission to the Government, the Irish Tourist Industry Confederation (Itic), the sector’s umbrella group, calls for an annual allocation for the tourism agencies of €164 million, up from €114 million this year.

Itic highlights that the agencies’ allocations totalled €153 million a decade ago, almost €40 million ahead of their current level. It said some of the cash could also be used to establish a Brexit “market diversification fund” for exposed tourism businesses.

The confederation has estimated that a worst-case, “no deal” exit for Britain would cost the Irish tourism industry up to €260 million next year.

Itic also reiterated its call for the capital budget for tourism over the next decade of the National Development Plan (NDP) to be more than doubled to about €600 million over the plan’s lifetime. It said the investment was required to build new large-scale tourism attractions and “regional experiences of international appeal”.

It claims that any investment in tourism will eventually deliver a 34:1 return to the State.

On the tax side, Itic insists the Government should not take away its special 9 per cent VAT rate, which Government officials this week described a “deadweight” of limited benefit. The industry credits the rate, reduced from 13.5 per cent as a temporary stimulus in 2011, with helping to create 80,000 direct jobs.