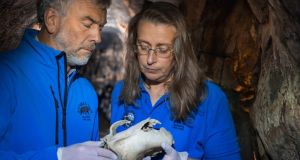 In its 40-odd years in operation as a tourist attraction in north Co Clare, diversification has been the watchword at the Ailwee Caves.

As with any tourism-reliant business, Ailwee has ridden ebbs and flows in visitor numbers. Recessions, low cost airfares, 9/11, ash clouds and even Sunday shopping all took their toll over the years.

But instead of battening down the hatches, Ailwee’s owners have consistently sought to expand and diversify their offering, allowing the business to shapeshift from a simple show cave into an eclectic basket of operations – adding cheese production, a Santa’s workshop, a children’s creche and a bird-of-prey centre to their repertoire down the years.

Ailwee was opened as a show-cave in 1976, the brainchild of Mícheál Mulqueeney, a Kilfenora schoolteacher, and Roger Johnson, a geologist from Nottingham.

“You would have had the business brain from the Johnson side of things and the local diplomacy and politics from my father’s side,” says Nuala Mulqueeney, daughter of Mícheál and director of the caves alongside Nicky Johnson, son of Roger.

Initially running the administration of the caves out of portable offices, visitor numbers of 20,000 in the operation’s maiden year quickly doubled and an access building was commissioned. It relied on the efforts of striking postmen in 1979 to get it over the line in time for a 1980 opening.

As visitor numbers grew throughout the 1980s, the owners set about finding a way to upsell on the product.

“The whole idea was how do we get them to stay a bit longer with us and give them something extra, and therefore earn a bit of extra money,” says Mulqueeney.

Burren Gold Cheese was launched, using excess milk from local farmers who were outstripping their milk quotas, and the business began churning out 10 tonnes of gouda annually.

Visitor numbers peaked in the 1990s, with 220,000 people coming annually during the eight months the caves were open.

“For us, the 1990s were the crest of a wave, really and truly. We were flying high,” says Mulqueeney. “I can still see wet August bank holidays here and the queues going up the car park. My father handing out umbrellas to keep people in the queue for fear they would say ‘Sod this’ and go someplace else.”

Expansion continued, with the lengthening of the tourist season allowing for opening even during the winter. At the turn of the millennium, Santa’s workshop was opened for three weeks over the Christmas period, making Ailwee a year-round operation.

But visitor numbers fell in the Noughties: tourists began to favour Dublin Airport over Shannon; local competition pulled tourists to other west of Ireland attractions; and low-cost airfares made Irish holidaymakers more likely to holiday in Barcelona or Budapest than the Burren.

“All those things on the horizon will have an effect on your visitor numbers,” says Mulqueeney. And – perhaps somewhat bizarrely – the introduction of Sunday shopping to Ireland also hit visitor numbers.

“Heretofore it wasn’t something that was vying for shoppers’ free time,” says Mulqueeney. “But I do remember it was the big story here. I might have been in my teens and thinking: ‘Oh God, the Sunday shopping is going to close us down!’ But it didn’t.”

The 9/11 attacks later decimated the tourism market temporarily, as Americans stopped flying and the value of the dollar tanked: “Our American market just went. They just weren’t there any more.”

And the recent global recession later hit hard for a couple of years with would-be tourists from Ireland and abroad opting to stay at home. But as the financial crisis bit, Ailwee made the move in 2008 to diversify once more, introducing a bird-of-prey centre as another offering for potential guests.

“Sometimes, if people see the word ‘cave’, it’s a no-go area because they’re claustrophobic or what have you. And not much changes in a cave over hundreds of years. So they think: ‘If I’ve seen one cave, I’ve seen them all.’”

The bird-of-prey centre – which is home to about 60 birds from owls and vultures to hawks and eagles – provides an alternative attraction to holidaymakers.

With annual visitor numbers sitting steady about 140,000-150,000, the focus now is on making the most of the visitors who come.

“With visitor numbers, yes we can try and get more and more people over our threshold but, failing that, what we need to do is, if people are staying in the area, [getting them to] spend a bit more time with us and spend a bit more money with us,” says Mulqueeney.

Supporting the local community remains a key part of the business. Ailwee today is an important source of employment in the region, providing the equivalent of 85 full-time jobs – 35 year-round, 70 during the summer and 100 at Christmas.

Mechanising the caves to reduce staff costs could slash overheads considerably, but that is not on the cards.

“We could easily stick recordings into the cave and let people press the button as they pass by. That’s not how we do it here in north Clare,” says Mulqueeney.

“This family business has kept me in the region. And my daughters are now going to the school that I went to school in. And there’s an awful lot of families replicated like that on my staff and that’s good. That has got to be good for rural development as well.”