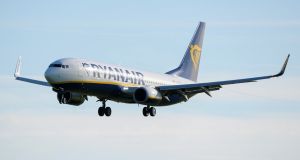 Ryanair said that it did not comment on negotiations with its pilots. Photographe: Aidan Crawley/Bloomberg

Talks between Ryanair and the Irish Airline Pilots’ Association (Ialpa) on a recognition deal were “constructive” , the trade union said on Wednesday.

The two sides met to continue talks on the airline’s pledge to recognise Ialpa – part of trade union Fórsa – for collective bargaining.

Fórsa said afterwards that the two sides exchanged views on how a final agreement should look and described the talks as “constructive”.

Ryanair said that it did not comment on negotiations with its pilots. The airline reversed its policy of not recognising unions following strike threats at Irish and other airports before Christmas.

The meeting came as the airline reported that passenger numbers grew 10 per cent to 129 million in 2017.

This was a slower rate of growth than in 2016, when passenger numbers increased 15 per cent to 117 million.

A mix up over pilots’ rosters forced Ryanair to cancel flights in September and October, hitting more than 300,000 passengers.

Ryanair subsequently said that it would slow growth between November and March by flying 25 fewer craft than the airline originally planned.

The airline said that it carried 9.3 million passengers in December, a 3 per cent rise over the same month in 2016.

Ryanair filled 95 per cent of the available seats on its aircraft last month compared to 94 per cent in December 2016. It cited lower fares for the increase.