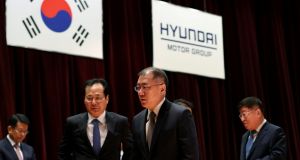 Shares in Hyundai Motor and its affiliate Kia Motors slid on Tuesday morning after the South Korean automaker forecast a modest increase in 2018 sales.

The world’s fifth-largest auto group by sales set its 2018 sales target at 7.55 million vehicles after setting a record goal of 8.25 million units last year. But the group is likely to have missed last year’s sales target for the third consecutive year, analysts said.

“Global auto demand growth is expected to stagnate this year, with demand seen shrinking in major markets like the US, China and Europe, ” Yoon Yeo-chul, Hyundai’s vice chairman, said in a new year speech to employees.

The carmakers are struggling to boost sales in two of their biggest markets, China and the United States, due to a lack of sports utility vehicle models.

Despite the recent diplomatic thaw between South Korea and China after a year-long spat over Seoul’s installation of a US missile shield, Hyundai’s sales in China are not improving as fast as hoped as the carmaker is struggling to compete with local mainland carmakers that offer affordable SUVs.

Hyundai will announce 2017 sales figures later in the day.