Ryanair to meet Irish pilots’ union for talks about recognition 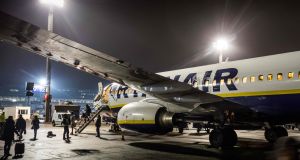 While both Ialpa and Spac have lifted their strike threats, Germany’s VC still has a mandate for industrial action. Photograph: Frank Rumpenhorst/AFP/Getty Images

Ryanair will meet the Irish Airline Pilots’ Association (Ialpa) on Wednesday as it continues talks about recognising unions this week.

The airline last month reversed its policy of not dealing with unions, pledging to recognise labour organisations to avert strikes in the run-up to Christmas.

The carrier is due to meet Ialpa – formerly part of Impact, and now a branch of newly created union Fórsa – to continue talks begun two weeks ago.

Ryanair will follow this by meeting the British Airline Pilots’ Association on Thursday and the German equivalent, VC, on Friday.

The Irish airline is due to meet Italian and Portuguese pilot unions later this month and has confirmed that it intends to recognise groups representing cabin crew.

According to Ialpa, Wednesday’s meeting will begin talks on a comprehensive recognition agreement and is likely to be the first in a number of engagements.

“Our hope is that the meeting will mark the start of a standard industrial relations process between management and union at the company,” Fórsa said. Ialpa members at Ryanair dropped a threat to strike shortly before Christmas after the airline confirmed in writing that it intended to recognise the union.

Irish-based pilots voted early in December to strike and subsequently notified the company that they intended taking a one-day action at Cork, Dublin and Shannon airports.

Germany’s VC and the Portuguese pilots’ union Spac followed suit. They also signalled that their members in Ryanair would strike in the days before the holidays.

As strikes threatened a number of its European bases, Ryanair chief executive Michael O’Leary announced that the company would reverse its policy of not recognising trade unions in order to prevent disruption for passengers.

While both Ialpa and Spac have lifted their strike threats, Germany’s VC still has a mandate for industrial action. Its members in Ryanair stopped work for four hours on the Friday before Christmas after the union and company clashed over the membership of VC’s negotiating team.

Pilots had been seeking to change the airline’s own collective bargaining system and to get recognition for their unions.

“This may be required for Ryanair’s three UK domestic routes in the event of a hard Brexit in March 2019,” the airline said.

However, those rules may not apply if the UK leaves the EU without a deal – a so-called hard Brexit – next year. Mr O’Leary has warned that a hard Brexit with no deal on aviation could result in there being no flights between the UK and EU for a period in 2019.

1 Revenue publishes list of companies tapping State for wage support
2 Trump vs Biden: Stakes are high for the Irish economy
3 How long can Government afford to keep State pension age at 66?
4 Bake-off soy sauce tweet backfires for UK trade ministry
5 ‘Going abroad forced me to challenge assumptions that I had’
6 107 jobs at risk as Broderick’s shareholder considers examinership
7 Corporate America is breaking with Donald Trump
8 PTSB’s €1.4bn sale is a sign it is preparing for a fresh loans crisis
9 Will remote working become the norm?
10 Cost of building homes can be ‘much cheaper’
Real news has value SUBSCRIBE