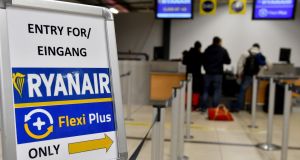 Ryanair flies into uncharted skies in January when it begins talks in earnest with unions representing pilots and prepares to do the same, ultimately, with other staff.

The airline reversed its long-standing policy of not dealing with organised labour to avert strikes in the Republic, Germany and Portugal, shortly before Christmas.

Ryanair is already over the first hurdle as far as Impact-Ialpa is concerned. The union’s spokesman, Bernard Harbor, confirmed before Christmas that the airline had committed in “black and white” to recognising the organisation for collective bargaining purposes. The second meeting between the pair – scheduled for January 3rd – will be about getting down to the brass tacks of this.

With VC, Ryanair has a different challenge on its hands. The union and airline clashed at their first meeting on December 20th and the Irish company’s directly-employed German pilots held a four-hour strike on Friday, December 22nd.

The crux of the row was that Ryanair did not want to deal with one of VC’s company council members. These are union reps working for the airline. The carrier maintained that the individual at the centre of the dispute was not elected, did not work for the company and was suing it.

VC warned that Ryanair could not dictate the members of its negotiating team. Nevertheless, both remained committed to meeting on January 5th. While Ingolf Schumacher, head of VC’s industrial department, questioned Ryanair’s commitment to recognition following the row, the union said it would initiate contact with the airline following its stoppage and intended to meet its representatives in January.

Sources suggest the union does believe that airline is sincere about working with the organisation. “It’s a cultural clash really,” says one. “Ryanair want to do things their way and control the negotiation, while VC have their own way of doing things.”

Ryanair will also meet Balpa in early January. On the face of it, this should be straightforward. The British union was among the first to welcome the airline’s commitment to recognition. Its general secretary, Brian Strutton, subsequently noted that the organisation had “useful” initial talks with the company’s chief operations officer, Peter Bellew.

While Balpa was organising a Ryanair company council, it was behind its Irish and continental counterparts and had not reached the point where it was weighing industrial action.

Investors have been having trouble working out what all this means. A sell-off that followed Ryanair’s announcement that it would recognise unions knocked €2 billion off its value over two days’ trading. The shares hit a low of €14.21 at one point before breaking back through the €15 mark about a week later. However, that was still short of the €17.00-plus mark where the stock had been trading.

Analysts said the markets were trying to digest the likely cost of the move and the impact of other factors such as a possible loss of flexibility. The company calculated the cost at €100 million a year.

Ryanair’s decision was rooted in the drama that followed the airline’s announcement in September that it would have to cancel thousands of flights. A rostering breakdown had left it without enough pilots to operate all its craft.

The airline ultimately ironed out the difficulty by the end of the month. However, the genie was out of the bottle by then. Pilots began campaigning for a new collective bargaining system to replace the employee representative councils that negotiated for staff at each Ryanair base.

They established a new European Employee Representative Council which sought to negotiate for Ryanair’s 4,000-plus pilots, with the backing of unions in each of the countries where the airline operates, including Ialpa.

During November those unions wrote to Ryanair and its chief executive, Michael O’Leary, urging the company to begin talks with named pilots, who made up the company councils in each organisation. After the airline refused, they began preparing for industrial action, beginning with Ialpa, whose members began balloting on December 7th. As the strike threats mounted, Ryanair announced that it would recognise the unions for collective bargaining purposes.

While Ryanair will continue to grab headlines, 2018 promises to be an interesting year for at least one rival, Norwegian Air International. The Irish-registered carrier began offering cheap flights to the east coast of the United States from Belfast, Cork, Dublin and Shannon midway through 2017.

This was part of its parent Norwegian Air Shuttle’s push to establish a low-cost long-haul business tying Europe with the US and Asia. However, the airline’s rapid growth was making investors nervous. Analysts said it was heading for operating losses of about €150 million in 2017.

There were suggestions that it would sell its Irish-based leasing arm, Arctic Aviation Assets, which has a fleet worth €1.5 billion, to raise cash. However, the company subsequently pointed out that this was seen as an option only in the longer term. The group, led by chief executive Bjorn Kjos, remained bullish about its prospects for 2018 and beyond.