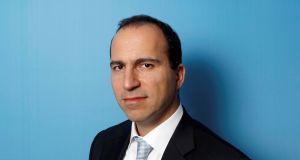 A consortium led by SoftBank Group will buy a large number of shares of Uber Technologies in a deal that values the ride-services firm at $48 billion, Uber has announced in a victory for new chief executive Dara Khosrowshahi.

The price is a roughly 30 per cent discount to Uber’s most recent valuation of $68 billion. The deal will trigger a number of changes in the way the board oversees the company, which is dealing with federal criminal probes, a high-stakes lawsuit and an overhaul of its workplace culture.

SoftBank and the rest of the consortium, which includes Dragoneer Investment Group, will own approximately 17.5 per cent of Uber, a person familiar with the matter said. That stake includes a share purchase, through a tender offer, from earlier investors and employees at the $48 billion valuation, as well as a $1.25 billion investment of fresh funding at the $68 billion level.

Uber said the deal will close early next year. On Thursday it said existing investors had agreed to sell enough shares for SoftBank to go through with the transaction.

SoftBank itself will keep a 15 per cent stake, while the rest of the consortium will own approximately 3 per cent, according to a second person familiar with the matter.

Private equity group TPG was part of the consortium of buyers, a source familiar with the matter said.

Mr Khosrowshahi, who took the top job in August after Travis Kalanick was forced to step down in June, helped negotiate the deal. Uber is losing more than $1 billion each quarter, and a new cash infusion is critical. The company is also planning an initial public offering in 2019.

Uber will use the investment “to support our technology investments, fuel our growth, and strengthen our corporate governance”, a spokesman, who declined to be named, said.

When the deal is completed, the company will make governance changes, expanding Uber’s board from 11 to 17 members including four independent directors, limiting some early shareholders’ voting power and cutting the control wielded by Mr Kalanick, who remains on the board and is still one of the largest stakeholders. – Reuters