Cantillon: The revolutionary airline can now keep us connected to the rest of the EU 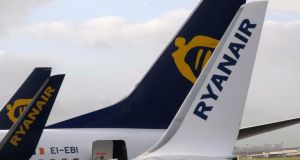 Market forces: Ryanair has enabled people to fly to more destinations far more cheaply than they could 30 years ago. Photograph: Oliver Hoslet/EPA

Ryanair and its chief executive, Michael O’Leary, have been getting a lot of flak lately, much of it drawn upon themselves, but it’s worth remembering the benefits the company has brought as well.

Three decades ago, before Ryanair embarked on its low-cost strategy, the Republic had one airline, Aer Lingus, which the taxpayer had to bail out from time to time and which charged high fares to fly people to a limited number of destinations in Britain, Europe and the United States.

In this the Republic was no different from most other European countries. But for an island nation that wanted to grow its economy by increasing exports and tourism, it was pretty shocking that its flag-carrying airline did not work out a way of flying people in and out of here cheaply and efficiently.

Aer Lingus is a very different creature today. A recent note from Barclays Bank analysts points out that it is one of the most competitive carriers in the stable of its owner, International Airlines Group, precisely because it has had to take on Ryanair in its home market.

This reflects a wider picture. Air travel in Europe is very different today because of the low-cost revolution led by Ryanair and aided by the European Union’s decision to liberalise aviation 25 years ago. These things forced everyone in the sector to compete.

As a result, consumers and businesspeople can fly to more destinations far more cheaply than they could before all this happened.

This particularly benefits the Republic, which already sits on an island and will soon have another island sitting between it and the key EU market. If Ryanair didn’t exist we’d have to invent it, or something like it.