Ship will carry 1,800 passengers and crew and 330 containers on Dublin-Holyhead route 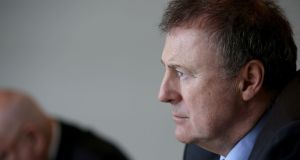 Irish Continental Group (ICG) is spending more than €165 million on what will be the world’s biggest car ferry for its Dublin to Holyhead route.

The transport company has signed a deal with German firm FSG to build the ship and deliver it before mid-2020.

The new craft will cost €165.2 million and carry 1,800 passengers and crew along with 330 freight containers. It will be the biggest ferry in the world by vehicle capacity, the Irish shipping company said.

ICG’s shares dipped 0.52 per cent to close at €5.73 in Dublin on Tuesday following the news.

When it is operating, the new ship is expected to replace the MV Ulysses, which will then take over from the MV Epsilon, a chartered vessel, in ICG’s fleet.

This will allow the company to deploy the MV WB Yeats, which it is due to receive this year, on its direct Ireland-France route, alongside the MV Oscar Wilde.

The ship will have five decks of freight capacity. Uniquely, it is being designed to allow three tiers of loading, which will speed up turnaround times by making loading and unloading more efficient, ICG said.

Under the deal with FSG, the Irish company will pay 20 per cent of the contract price in instalments during construction, and the remaining 80 per cent on delivery.

ICG said that it would borrow the money to pay for the new ferry. Bank guarantees will protect the pre-delivery instalment payments.

“This investment underpins the confidence the group has in the markets in which we operate,” said Eamonn Rothwell, chief executive of ICG. “Alongside the recent investment in the MV WB Yeats, it brings our total investment to €315 million for these two vessels designed for our operations on the Irish Sea.

“The construction of a cruise ferry of this size will offer both additional capacity and an enhanced experience for both our tourism and freight customers.

“This infrastructural investment enhances ‘the bridge’ to the UK and continental Europe that is a vital part of the continued success of Ireland’s open economy.”

Paul Keeley, director of commercial development at State body Fáilte Ireland, described the move as a “huge vote of confidence” in Irish tourism. He said that the new craft, along with the WB Yeats, would help the industry expand and enhance its potential.

Stephen Furlong, an analyst with Dublin stockbrokers Davy, pointed out that ICG has proved in the past to be astute about the timing of capital spending. He said that the brokers regarded Tuesday’s announcement as strategic for the long-term growth of the business and rated ICG as an outperform, the equivalent of a buy.