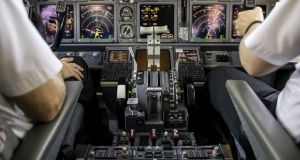 The cockpit of a Boeing 737-800 aircraft. Photograph: iStock

The Credit Bank of Moscow (CBM) has sold its Irish aircraft leasing business to a European aircraft lessor, GTLK Europe.

The sale, for an undisclosed sum, includes CBM’s six Boeing 737-800 aircraft which it received as part of a transaction to resolve troubled debt of one of its corporate clients.

A going concern note in those accounts said the directors were confident that “the realisable value of the respective aircraft will be sufficient to discharge the liabilities of the company”. At the time the company at lease rental contracts worth €168.5 million while its aircraft were valued at $235.2 million.

The company had no employees in Ireland during the financial period and Maples Fiduciary Services Limited acted as its corporate administrator.

1 Consumer mood darkens, businesses react to Level 5 and Diageo launches Guinness 0.0
2 How long can Government afford to keep State pension age at 66?
3 How much will a Covid-19 vaccine cost?
4 Guinness brings out a non-alcoholic version of the black stuff
5 If lockdown has morphed from tactic to strategy, the State has failed
6 John FitzGerald: North needs reform more than unity
7 Sherry FitzGerald aims for bigger share of broker market
8 Frank Fitzgibbon stepping down as Sunday Times editor
9 Greencoat Renewables acquires Tipperary wind farm
10 How on earth do we the calculate the cost of Level 5 for the Irish economy?
Real news has value SUBSCRIBE