Qantas, Southwest step up checks after 50 aeroplanes grounded due to cracks 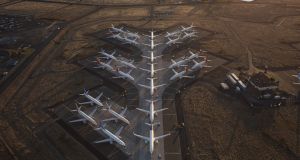 Ryanair does not expect flights it operates on its large fleet of Boeing 737 NG aircraft to be affected after up to 50 of the planes were grounded by airlines over cracks.

Qantas Airways and Southwest Airlines are stepping up checks for structural cracks on their planes after discovering problems with 737 NGs.

There are currently thousands of 737 NG planes in use by airlines around the world. The cracks that have been discovered are on what is known as the “pickle fork” – a part that attaches the plane’s fuselage, or body, to the wing structure.

Repairing the cracks requires grounding the airplane and costs an estimated $275,000 per aircraft, according to aviation consultancy IBA.

Ryanair has more than 400 Boeing 737NGs in service but it said in a statement that, while it continues to review its aircraft, it was unlikely there would be any impact upon operations or fleet availability.

Analysts agreed, pointing out that the airline has a young fleet, and that the planes which have been grounded to date have all been in service for a longer period.

The issue surfaced while Boeing’s 737 MAX fleet – the successor to the 737 NG – is grounded globally following two deadly crashes.

The US Federal Aviation Administration (FAA) in early October mandated that airlines check planes with more than 30,000 take-off and landing cycles within seven days. But Australian flag carrier Qantas has since said that it has discovered cracks in a plane with just under 27,000 cycles that had been removed from service for repair. While no Qantas jets have yet reached 30,000 cycles, the airline said it plans to inspect 33 planes with more than 22,600 cycles by the end of this week.

A source with knowledge of the matter told Reuters that cracks have also been found on a second Qantas jet with nearly 27,500 cycles in an inspection on Wednesday. Qantas did not respond to a request for comment on Thursday.

Southwest found cracks in one plane with about 28,500 cycles, a separate source with knowledge of the matter said. A Southwest spokesman said the airline has pulled three jets from service for pickle fork repairs but he could not confirm the number of cycles. The airline has complied with the FAA directive on inspections but is now expanding checks to its entire 737 NG fleet, he added.

A Boeing spokeswoman said on Thursday that just over 1,000 planes had met the threshold for inspections to date and, of those, fewer than 5 per cent had issues.

In a filing with the US’s Securities and Exchange Commission last week, Boeing said all 737 NGs with more than 30,000 flight cycles and about one-third of planes with over 22,600 flight cycles had been inspected for pickle fork cracks. The manufacturer said additional assessments were underway to determine the cause and potential implications for planes with fewer than 22,600 cycles. “Depending on the results of these assessments, additional inspections or repairs may be required,” Boeing said.

It said that, so far, the repair costs were not big enough to affect its bottom line. But the company added that it could not estimate the potential financial impact because the inspections were ongoing.

American Airlines and United Airlines, whose 737 NG fleets have less than 30,000 cycles, are also inspecting their entire fleets but have not found any pickle fork issues so far, representatives for both airlines said.

Virgin Australia said it had already inspected all 19 of its 737 NGs with more than 22,600 cycles and did not find any cracks. South Korea’s transport ministry said all nine 737 NGs grounded in the country with cracks had more than 30,000 cycles. – Additional reporting: Reuters