Ryanair hires company in Jordan to carry out aircraft maintenance 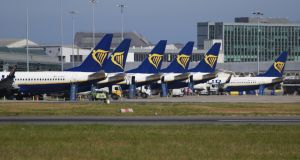 Ryanair has booked two lines at the Jordanian company’s facility from next month through to March 2020, where the Boeing aircraft will be checked

Ryanair has hired Jordan-based Joramco to carry out detailed maintenance checks on aircraft.

The Irish carrier does much of its own maintenance and has several facilities for this at various locations around Europe, including one at Glasgow in Scotland.

Ryanair said its extensive maintenance schedule meant it had to contract out some of the work to businesses such as Joramco. “In addition, we will also extend our own capacity with the recently-announced expansion of our Seville facilities with an additional three-bay hangar.”

Joramco confirmed in a statement that it has signed a maintenance agreement for the first time with Ryanair. The Irish carrier has booked two lines at the Jordanian company’s facility from next month through to March 2020 where the Boeing aircraft will be checked.

Heavy maintenance is the most comprehensive of the checks to which aircraft are subject. It involves taking much of an individual craft apart for inspection and overhaul. Estimates of the cost run to $1 million (€900,000) per craft for models such as the Boeing 737.

Jeff Wilkinson, Joramco’s chief executive, said t the company was delighted to mark the beginning of a partnership with Ryanair. “We look forward to a long-term relationship.”

Karsten Muhlenfeld, Ryanair’s director of engineering, noted that the airline had one of the youngest fleets in the world and a leading safety record.

Joramco, short for Jordanian Aircraft Maintenance Ltd, is part of Gulf-based Dubai Aerospace Enterprises, whose finance division has an operation in Dublin. One of the maintenance company’s other clients is Irish-headquartered aircraft leasing giant Aercap.