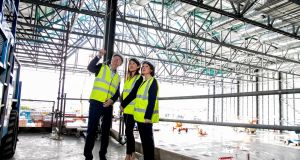 State-owned Shannon Group is close to completing an €18 million aircraft hangar, the first built in the Republic in almost 20 years.

The company repsonsible for running Shannon Airport said on Tuesday that the 8,550sq m (92,000sq ft) hangar would be completed by the end of the year.

Shannon has lined up International Aerospace Coatings, which specialises in painting aircraft, as a tenant for the building, which is located at the airport.

The building covers an area equivalent to 30 full-size tennis courts and can contain some of the biggest aircraft in the world.

Mary Considine, Shannon Group’s chief executive, noted that the airport already had more hangar space than any other in the Republic.

“These are fully occupied and this project is being undertaken to meet demand for additional space and fulfil our role in growing and expanding Shannon’s cluster of aviation businesses,” she said.

Shannon Group spent €18 million building the hangar, borrowing some of the cash from the Irish Strategic Investment Fund, a State scheme for financing projects that create jobs and boost growth.

Donal Murphy, the fund’s head of infrastructure and credit investments, pointed out that the organisation had invested a total of €26 million in Shannon Airport projects.