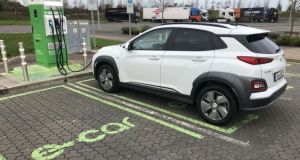 Politically it will be better to face the ire of 6,000 motorists now, than tens of thousands in a few years time

Electric car users will have to pay for their public electricity from November 18th. It’s about time.

The problem with bonuses and incentives is that they quickly become entitlements and, when they aren’t paid, grievances. The same applies with free services or handouts.

This is not like a tax reduction on the purchase of a new car that cuts the Government’s tax take, but a commodity that costs money to generate, yet is being given away to a select few.

It was right to offer it for free during the initial move to electric cars, as these early adopters were taking a lot of risks in terms of spending big money on what could – and did – become outdated technology. That’s no longer the case with the new electric cars.

We can, of course, expect a lot of resistance, complaints and gripes. Yet the authorities need to nip this in the bud. If they have any doubts, just remember the water charges debacle. Politically it will be better to face the ire of 6,000 motorists now, than that of tens of thousands in a few years time.

The usage model for electric cars in most other countries is that you pay to charge your car. The idea is that you are encouraged to recharge at home or locally where you park, and then only use fast chargers as a way to support longer-distance travel. Indeed, while the network is being upgraded to allow for more high-powered charging points, the standard 22kW public points will remain fee free. That means you also don’t end up with charging rage, a growing phenomenon where people get irate with each other for hogging a charging point. The ESB should look to introduce punitive tariffs if cars are still plugged in long after they have fully recharged.

The ESB’s move should also attract more rival networks to introduce stations across the State. Current electric car owners – and a few manufacturers – may grumble, but they probably knew their free ride wasn’t going to last forever.