Almost 25.5 million passengers have travelled through Dublin Airport so far this year 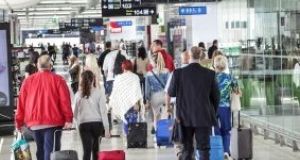 The passenger traffic increase of 4 per cent on last year makes it the busiest September in the airport’s 79-year history.

Dublin Airport saw a record three million passengers pass through its gates in September despite fears that Brexit would lead to a falloff in numbers.

This was an increase of 4 per cent on last year, making it the busiest September in the airport’s 79-year history.

Almost 25.5 million passengers have travelled through Dublin Airport in the first nine months of the year, a 1.3 million or 5 per cent increase on last year.

State-owned DAA intends spending €1.8 billion on new facilities at Dublin, such as aircraft stands and boarding gates, that are needed to ease current bottlenecks and allow the airport cater for up to 40 million passengers a year.

The latest figures show passenger numbers to and from continental Europe increased by 6 per cent as almost 1.7 million passengers travelled to and from European destinations during the month.

Almost 828,000 passengers travelled to and from UK destinations in September, which was a 1 per cent increase over the same period last year.

Separate figures from the Central Statistics Office show fewer tourists from Britain have been travelling to the Republic, a shift that is linked the current Brexit-related weakness in sterling, which has dented their spending power.

The Dublin Airport data shows transatlantic traffic to North America increased by 4 per cent as almost 443,000 passengers travelled on this route sector last month, while passenger numbers on domestic routes rose by 1 per cent with more than 9,000 travelling.

“So far this year, the number of passengers using Dublin Airport as a hub to connect to other destinations has increased by 6 per cent, with almost more than 1.5 million passengers connecting at the airport between January and September.