Peugeot board approves plan to merge with rival Fiat-Chrysler

Under the proposal, shareholders of each company would own 50% of the combined entity 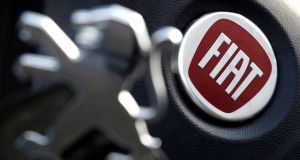 Under the proposal, shareholders of each company would own 50 per cent of the combined entity, the people said. Fiat investors would receive a dividend of €5.5 billion.

The board of French carmaker PSA Group has approved a plan to merge with Italian-American rival Fiat Chrysler Automobiles, a combination that would create one of the world’s largest auto manufacturers, according to people familiar with the matter.

Under the proposal, shareholders of each company would own 50 per cent of the combined entity, the people said. Fiat investors would receive a dividend of €5.5 billion, while PSA would distribute its stake in autoparts maker Faurecia SE, worth about €3 billion, to shareholders.

The board would be made up of 11 members, with six from the PSA side including chief executive Carlos Tavares, who will lead the new company. Fiat chairman John Elkann would take the same role at the enlarged group.

Fiat Chrysler’s directors, as well as the board of its largest shareholder, Exor NV, are scheduled to meet later tonight to discuss the proposal, the people said. The plan authorised by PSA’s board calls for negotiations of a binding memorandum of understanding that could last several weeks, said one of the people.

A representative for PSA, the maker of Peugeot and Citroen cars, declined to comment. A Fiat spokesman wasn’t immediately available to comment.

A merger of Fiat Chrysler and PSA, the second biggest automaker for car sales in Europe, would create a regional powerhouse to rival Volkswagen Group, with a stock-market value of about $49 billion – comparable to Japan’s Honda Motors. The tie-up would also bring together two auto-making dynasties, the billionaire Agnelli clan in Italy and the Peugeot family of France.

The merger plan comes several months after Fiat Chrysler and PSA explored a partnership on pooling investment to build cars in Europe, and following the collapse in June of negotiations between the Fiat and French competitor Renault.

Automakers face tremendous pressure to pool their resources for platform development, manufacturing and purchasing as they battle through trade wars, a global slowdown and an expensive shift toward electrification and autonomous driving. Producers face the additional burden in Europe of new rules on emissions.

Against this backdrop, the pace of dealmaking has picked up. Volkswagen in July said it will work with Ford on electric and self-driving car technology, while Toyota is strengthening ties with partners such as Subaru and China’s BYD.

The Indian conglomerate that owns Jaguar Land Rover has said it’s open to finding partners for the British automaker but isn’t planning on selling the embattled unit.

Dismal car sales have also added to the mix. Volkswagen on Wednesday lowered its outlook for vehicle deliveries this year due to a faster-than-expected decline in auto markets.

The French government is likely to play a key role because France is one of the biggest shareholders of PSA, whose brands also include Opel and Vauxhall. The French finance ministry has signaled support for a deal, while warning it would scrutinize the jobs impact and governance structure of the new company, as well as its commitment to build a European battery-maker.

PSA has been floated as a logical merger partner with Fiat, because of their complementary product and geographic fit, and the two sides discussed partnership possibilities this year. However, the Italian-American carmaker instead pursued a deal with Renault.

Those talks were called off in June when Elkann walked away amid opposition from the French government and a lack of support from Renault’s Japanese alliance partner Nissan.

Tavares has sought to re-establish Peugeot’s foothold in the U.S., a market it exited in 1991. He set plans earlier this year for a return, with shipments starting from Europe or China in 2026.

Fiat Chrysler is seen as a laggard in new technologies such as electrification and autonomy, which are expected to cost automakers billions of dollars over the next decade.

The company has sought to secure its future with a larger partner for several years, dating back to late chief executive Sergio Marchionne’s failed courtship of General Motors. After being rebuffed by GM in 2015, rumors of talks with other automakers have swirled with varying intensity. – Bloomberg