Profits fall at Irish distributor for Jaguar and Land Rover

Performance impacted by Brexit, but revenues still rose 7% to over €195m 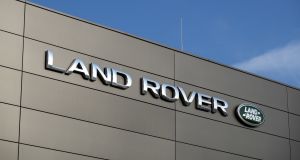 The drop in pre-tax profits at Armalou Holdings Ltd came in spite of revenues increasing by 7 per cent from €182.9 million to €195.93 million.

Pre-tax profits at the Irish distributor for Jaguar and Land Rover, the OHM Group, last year decreased by 22 per cent to €1.639 million.

The drop in pre-tax profits at Armalou Holdings Ltd, the registered name for the group, came in spite of revenues increasing by 7 per cent from €182.9 million to €195.93 million.

The directors state the performance of the group in 2018 was impacted by difficult market conditions as the demand for new cars fell due to the effect of Brexit on euro-sterling exchange rates.

The group is also involved in dealerships retailing Volvo, Ford, Seat and Skoda vehicles, while it also operates the Spirit Motor Group dealer group based in south Dublin.

According to Irish Motor Industry statistics, there were 1,024 Land Rover models sold here last year representing a 16 per cent decrease on 2017 sales while sales of Jaguar models reduced by 7 per cent to 608.

To date this year, 445 Jaguar models have been sold here representing a 25 per cent decline for the same period last year, while sales of Land Rover models have increased by 9 per cent to 1,077.

The group has bounced back from the plunging sales experienced during the recession, when sales of €40.8 million were recorded in 2010 – just over 20 per cent of the sales recorded last year

The three directors of the company are listed as Gabriel Hogan, John Declan McCourt and Rose Mary O’Brien.