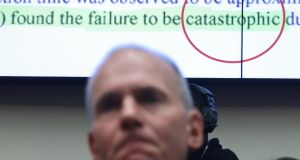 Documents released Wednesday show Boeing recognised internally that if a pilot took longer than 10 seconds to respond to a system failure, the consequences would be ‘catastrophic’

Boeing pushed to limit expensive training for pilots of its 737 Max aircraft, despite acknowledging that a failure of its anti-stall system could be “catastrophic” if they did not respond in 10 seconds, according to new documents released by Congress on Wednesday.

The documents were among a trove of evidence released by the House transportation committee during a hearing with Dennis Muilenburg, Boeing’s chief executive, who was testifying before Congress for the second time in two days about two accidents involving the aircraft that killed a total of 346 people.

Peter DeFazio, the Democratic chair of the committee, said new evidence showed the aircraft could have been made safer had Boeing not rushed development as it sought to compete with its rivals.

Mr DeFazio said: “This was inexplicable and inexcusable. We may never know what key steps could have been taken that would have altered the fate of those flights, but we do know that a variety of decisions could have made those planes safer and perhaps saved the lives of those on board.”

In marketing the Max to its customers, Boeing boasted that pilots would not need to train on a simulator to fly the new jet, the documents showed. Simulator training would have substantially increased the time and cost needed to get the jets in the air.

Committee members said they had seen evidence the aircraft manufacturer had agreed to repay Southwest Airlines $1 million (€898,000) per aircraft if their pilots did require additional training.

Emails previously provided to the committee show Boeing was asking the regulator not to force it to mention its anti-stall system, which has been implicated in both crashes, in the manual for the new aircraft.

The documents released on Wednesday show Boeing pushed for such an outcome despite recognising internally that if a pilot took longer than 10 seconds to respond to the system failing, the consequences would be “catastrophic”.

The committee also released a complaint in 2018 by a senior manager at Boeing that workers making the Max were “exhausted” by the pace of production, and that safety was being compromised.

According to Albio Sires, a Democratic representative from New Jersey, the manager warned in an email: “Right now all my internal warning bells are going off. And for the first time in my life, I’m sorry to say that I’m hesitant about putting my family on a Boeing aeroplane.”

Mr Muilenburg acknowledged the company had made errors in the design of the Max jet, which remains grounded worldwide following the two accidents. But he denied Boeing had a wider cultural problem with safety.

The Boeing chief executive also defended his pay, having received a multimillion-dollar bonus for 2018. Mr Muilenburg was paid $27 million last year - a 27 per cent increase on 2018. The compensation included a $13 million bonus.

He refused to promise not to take a salary this year, prompting an angry response from Steve Cohen, a Democratic congressman from Tennessee.

“You continue to work and make $30 million a year after these two horrific accidents that caused all these people’s relatives to go, to die,” said Mr Cohen. “You are not taking a cut in pay at all?”

Mr Muilenburg, who has sought to restore confidence in the 737 Max by taking part in recent test flights, was also compelled to admit that he could not remember ever flying on the aircraft before the accidents.

John Hamilton, Boeing’s chief engineer of commercial aircraft, who helped develop the 737 Max, admitted he could only “count on one hand” the number of times he had flown the jet.

Several members of the committee called for Mr Muilenberg to step down. “You are at the top and it is pretty clear to me, the families of the victims and the public that you should resign immediately,” said Jesus Garcia, a Democrat from Illinois. – Copyright The Financial Times Limited 2019