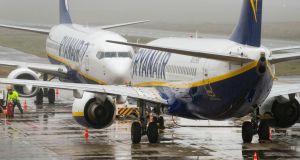 Ryanair began talks on Friday with the union behind the first pilots strike in the carrier’s 32-year history, as it continues to meet labour representatives following its surprise move just before Christmas to recognise unions.

Sources described the talks between Ryanair and officials of Germany’s Vereinigung Cockpit (VC) union in Frankfurt as “constructive”and said they will form the basis for real negotiations over the coming months. A spokesman for Ryanair and representatives from VC declined to comment.

While Ialpa and Portugal’s Spac union have lifted strike threats since Ryanair announced its volte-face on union recognition, VC still has a mandate for industrial action. However, the German union has previously indicated it does not plan further strikes as long as negotiations are constructive.

HSBC airline analyst Andrew Lobbenberg moved on Friday to cut his price target on Ryanair shares, which are currently trading at almost €15.30, to €13.50.

“Ryanair used to say that it would recognise unions when hell froze over. Faced with building straight threats, it has capitulated,” said Mr Lobbenberg. “A unionised Ryanair will still be profitable, cash-generative and value-creating in our view, but it will be a markedly different company.”

While Ryanair was dogged by thousands of flight cancellations late last year amid botched staff holiday rostering, the company continued to bolster its dominance of European’s low-cost airline market. It carried 129 million passengers in 2017, up 10 per cent on the year.