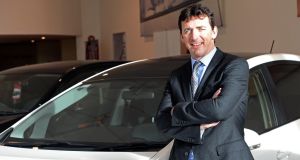 Steve Tormey, chief executive Toyota Ireland: “The Irish market will move out of diesel far quicker than the industry would like.” Photograph: Eric Luke

Sales of hybrid cars are set to overtake diesels within the next two years, according to Toyota Ireland chief executive Steve Tormey.

While diesel sales accounted for 65 per cent of new car sales last year, Mr Tormey predicts by 2020 that figure will fall to 20 per cent, with buyers moving to hybrids, bringing its share to 25 per cent.

The trend away from diesel engines has already seen a significant fall in the cars’ share across Europe, accounting for just 36 per cent of new car sales in Germany, down from 45 per cent a year ago.

According to Mr Tormey, initial dealer orders for passenger cars this month show diesel at 18 per cent of sales, hybrids comprise 55 per cent and the rest are petrol. “In Dublin the order bank for diesels is below 10 per cent,” he said.

“The demise of diesel is very plain to see, but our feeling is that the Irish market will move out of diesel far quicker than the industry would like, or believe,” he said.

Toyota finished last year as the second biggest selling new car brand in the Republic – behind Volkswagen – with 12,684 registrations, 38 per cent of which were diesel.

Diesel car sales have been the focus of political pressure since 2015, when US regulators revealed that VW had cheated on diesel emissions tests. Since then governments in France, the UK and the Netherlands have all announced plans to ban the sale of diesel and petrol-only cars between 2030 and 2040.

Toyota’s premium brand, Lexus, recently ran an advertising campaign under the tagline “diesel is dead”, generating a lot of negative feedback from rivals. However, Mr Tormey defended the campaign, saying that as a conquest brand, Lexus was merely differentiating itself from its largely diesel-powered German rivals.

Mr Tormey declined to put a timeframe on when Toyota Ireland will stop importing diesel or petrol-only cars, saying this would be dictated by consumer demand.

However, he recognised there is a great deal of uncertainty in the market, with consumers unsure of which engine option to choose, while used imports from the UK – particularly lower-priced diesels – are affecting resale values.

1 European Commission to appeal Apple tax ruling on Friday
2 Ireland is in danger of losing the woods for the trees on emissions reduction
3 FinCEN Files: Dublin-listed fund sent $23m to firm suspected of links to Russian crime boss
4 Coronavirus response must not kill the futures of Ireland’s young
5 FinCEN Files: Scale of challenge facing financial regulators revealed in leaked documents
6 Period of ‘extreme stress’ beckons for Irish businesses
7 Korn Ferry Ireland appoints Bob Casey managing director
8 PTSB names former Grant Thornton partner as interim CFO
9 The wealth of the Irish – how do your assets match up?
10 How to bring a hotel group through a pandemic
Real news has value SUBSCRIBE