But company claims it has made progress in overcoming manufacturing challenges 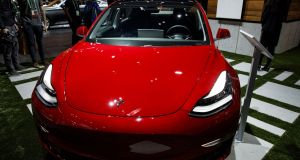 Tesla delayed a production target for its new Model 3 sedan for the second time on Wednesday, disappointing investors even as it claimed “major progress” overcoming manufacturing challenges that have hampered the vehicle’s rollout.

The delay sent shares of the California-based company down 2 per cent in after-market trading.

The Model 3 is critical to Tesla’s long-term success, as it is the most affordable of its cars to date and is the only one capable of transforming the niche automaker to a mass producer amid a sea of rivals entering the nascent electric vehicle market.

Building the car efficiently and delivering it without delays to customers is also critical, as the money-losing company faces high cash burn. Delays increase the risk that reservation-holders will cancel orders.

“The further delay to (production volume) will leave analysts and investors focused on the implications for cash as we head through the first half of the year,? Evercore analyst George Galliers told Reuters.

The company burned through $1.1 billion in capital expenditures in its third quarter and said in November that fourth-quarter capex would also be about $1.1 billion.

RBC Capital Markets analyst Joseph Spak wrote in a note that he did not believe Tesla will be required to do a capital raise.

“We have them hovering about $1 billion in cash ... They don’t have a ton of wiggle room though in our view,” Mr Spak said.

Tesla said 860 Model 3 vehicles were in transit to customers at the end of the fourth quarter.

The company said it delivered a total of 29,870 vehicles in the fourth quarter, including 15,200 Model S vehicles and 13,120 Model X cars. Analysts had expected total deliveries of about 30,000.

Tesla had initially predicted to reach the milestone of 5,000 vehicles per week in December, but in November deferred the target to the end of the first quarter.

Tesla said on Wednesday its production rate had increased significantly despite the delays.

“In the last seven working days of the quarter, we made 793 Model 3s, and in the last few days, we hit a production rate on each of our manufacturing lines that extrapolates to over 1,000 Model 3s per week,” the company said in a statement.

That pace of production is still below that of many carmakers. A conventional car factory operating at full speed on two shifts can churn out nearly 1,000 vehicles a day.

The Model 3 - which starts at $35,000, or about half the price of its flagship Model S - was met with great enthusiasm when its prototype was first unveiled in early 2016. Tesla said in August it had about 500,000 reservations for the car and demand was not a constraint.

Production, however, hit snags during a period of “manufacturing hell” Musk first warned of in July. Among the issues Tesla faced was its battery module assembly line at its Nevada Gigafactory, which required a redesign.

Although bullish investors have generally waved off early Model 3 problems, instead focusing on the future prospects of Tesla, critics warn that Model 3 issues could sour demand for Tesla’s mass-market vehicle, delay sorely needed revenue and compromise the company’s ability to raise cash in the future.

Tesla shares, despite paring some gains from a high of $385 in September, still trade at 46 per cent above their price a year ago. - Reuters