Project to be overseen by Gas Networks Ireland and NUI Galway 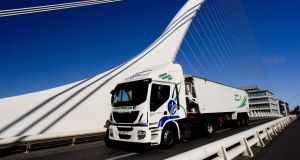 Up to €20,000 is available to Irish businesses through Ervia towards the purchase of a new natural gas vehicle. Photograph: Fennell

The development of 70 compressed natural gas filling stations in Ireland to service trucks, vans and buses has been announced. The network will be provided under the European Causeway Project, and establishing it will be overseen by scientists at NUI Galway and Gas Networks Ireland (GNI).

Use of compressed natural gas is increasing being adopted for heavier modes of transport, and comes with green credentials – notably low carbon emissions – and cheaper running costs compared to traditional fossil fuels such as diesel.

NUIG will monitor the project, and its research will be fed back to gas operators throughout Europe, and assist in development of similar projects across the continent. The €25 million Causeway project, which supports green energy development, has received €6.5 million in co-funding from the European Commission.

Gas Networks Ireland is a division of Ervia, and has responsibility for developing, maintaining and operating the natural gas transmission and distribution networks in Ireland.

NUIG president Dr Jim Browne said their research would form the basis of the first use of an alternative, sustainable transport fuel in Ireland. “Within our Ryan Institute for Environment, Marine and Energy Research, in particular, we have built up a track record in sustainability research and innovation.”

He said this included decades of scientific and engineering expertise on renewable gas. “We look forward to NUIG playing a key role in distilling and disseminating the results and impacts of the Causeway Project, not only for the benefit of Ireland, but to provide learnings to other EU member states too.”

Delivery of the initial 14 fast-fill compressed natural gas stations will mark the first significant deployment of compressed natural gas refuelling infrastructure in Ireland, according to NUIG research fellow Pádraic Ó hUiginn. They will be incorporated around existing filling stations. “That is the most logical pathway.”

Gas Networks Ireland head of commercial Denis O’Sullivan said “the development of a natural gas transport network will significantly de-carbonise Ireland’s commercial fleet” – transport accounts for over one third of all energy used in Ireland,

In addition, a renewable gas injection facility will be built in 2018 allowing biomethane, a sustainable indigenous energy source, to be introduced into the Irish natural gas grid for the first time. It will be generated from agricultural and food waste using anaerobic digestion technology.

Mr O’Sullivan said compressed natural gas, and the soon to be introduced renewable gas (biomethane), would play a major role in making transport in Ireland cleaner.

“GNI is determined to play an important role in facilitating development of this new, cleaner transport network. It is particularly important that the advances we are making through this project, and through the work of NUIG, will play a role in changing the transport landscape throughout Europe.”

Up to €20,000 is available to Irish businesses through Ervia towards the purchase of a new natural gas vehicle.