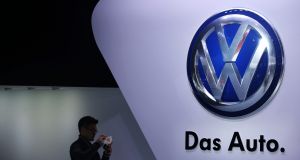 Aurora and Volkswagen said they had been working together over the past six months to integrate Aurora’s sensors, hardware and software into the German carmakers’ electric vehicles. Photograph: How Hwee Young/EPA

Silicon Valley start-up Aurora announced on Thursday partnerships with Volkswagen and Hyundai to develop a self-driving system within their vehicles, the latest tie-up between global automakers and Silicon Valley tech companies.

The non-exclusive partnerships mark the first deals for the young Silicon Valley company and show how some carmakers have chosen to partner with technology companies with more experience in artificial intelligence, deep learning and robotics in order to save time and money bringing self-driving cars to market.

Aurora was founded in 2016 by robotics expert Drew Bagnell, Chris Urmson, who came from Alphabet’s Google, and Sterling Anderson, who formerly worked at Tesla.

Aurora and Volkswagen said they had been working together over the past six months to integrate Aurora’s sensors, hardware and software into the German carmakers’ electric vehicles to develop self-driving ride services in cities.

Within the self-driving car space, Waymo - formerly Google’s autonomous program headed by Mr Urmson - is offering something similar. The tech company has been working with Fiat Chrysler since 2016 to outfit its Chrysler Pacifica minivans with autonomous technology. Waymo plans to launch a fully autonomous ride-hailing service early next year in Phoenix, Arizona.

In a statement, Volkswagen said the self-driving technology can be integrated over time across the automaker’s brands and in different product categories, whether self-driving pods, shuttles, delivery vans or self-driving trucks.

For Hyundai, Aurora’s technology will be incorporated into custom-developed models and tested in markets including China. Hyundai said the first model to be used in testing will be its latest generation fuel-cell vehicle, debuting at the CES technology conference in Las Vegas next week.

Under the alliance, Hyundai plans to commercialise level 4 autonomous vehicles - which can operate without human input or oversight under select conditions - in unidentified “pilot smart cities” by 2021.

This is the first announcement on a self-driving technology partnership by the South Korean carmaker, which has traditionally shunned tie-ups in favour of developing technology in-house. The strategy has raised investor concerns that it may be left behind in the race for self-driving and electric cars.

A company spokeswoman said Hyundai has “various collaborations” under way in self-driving technology and would continue to pursue cooperation.

Mr Urmson said that while each carmaker partnership requires close collaboration to integrate the self-driving system, the technology is “quite transferrable” between vehicle models and manufacturers.