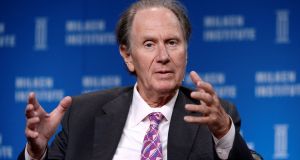 Ryanair chairman David Bonderman has pulled out of a high-profile investment conference in Saudi Arabia next week.

He becomes the latest in a list of global business figures who have withdrawn from the event following the recent disappearance and presumed killing of a dissident journalist in the Saudi consulate in Istanbul.

Mr Bonderman, the co-founder of private equity giant TPG Capital, was scheduled to give an address at the Future Investment Initiative (FII) event, nicknamed by US media as “Davos in the Desert”.

FII, which is meant to be a glittering showcase of Saudi’s economic future, will be hosted by crown prince Mohammed Bin Salman, who in recent days has been at the centre of a global storm of allegations surrounding the disappearance this month of Washington Post journalist Jamal Khashoggi.

Turkish media have reported that Mr Khashoggi, a critic of the Saudi regime, who vanished after entering the consulate in Istanbul, was killed by a Saudi state-sanctioned hit team. Turkish authorities leaked the full identities of the alleged hit team, whom local media say murdered Mr Khashoggi and cut up his body.

Saudi Arabia has, so far, denied he died in its consulate, although it has been widely speculated that its story could yet change.

The allegations have rebounded badly on Saudi Arabia and its 33-year-old crown prince, who is now under severe political pressure across the globe. The most immediate ramification is that a slew of senior business figures have pulled out of FII in protest.

The event was a centrepiece of Prince Bin Salman’s attempts to portray himself as a moderniser and Saudi Arabia as an investment location.

Meanwhile, Ibec chief executive Danny McCoy is due to speak this week alongside the Saudi ambassador to Ireland at an event to promote Irish business links to Saudi Arabia. The event, a joint effort between Ibec and the Ireland Saudi Arabia Business Council, will take place in the Shelbourne Hotel on Thursday.