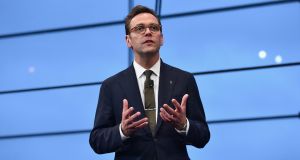 James Murdoch has become the favourite to succeed Elon Musk as the chairman of Tesla, which has to replace the electric carmaker’s founder in the role by the middle of next month

James Murdoch has become the favourite to succeed Elon Musk as the chairman of Tesla, which has to replace the electric carmaker’s founder in the role by the middle of next month.

Mr Musk agreed to leave the chairman’s post to settle a Securities and Exchange Commission lawsuit alleging he broke securities laws in August when he wrote on Twitter that he had “funding secured” to take Tesla private. He will remain chief executive.

Two people briefed on the discussions said Mr Murdoch, who is currently a non-executive director of Tesla, was the lead candidate for the job, which is required by the SEC to be an independent chairman. Another person said external options were still being considered.

Mr Musk is also known to favour Antonio Gracias, Tesla’s lead independent director, but has been advised Mr Gracias may not be sufficiently independent because of his long-term involvement with Mr Musk’s companies. Mr Gracias’ firm, Valor Equity Partners, invested in Tesla in 2005, selling its shares in the company’s IPO in 2010. He also invested in SpaceX, Mr Musk’s rocket business.

Mr Murdoch, who will step down as chief executive of 21st Century Fox when the media group completes the sale of its entertainment assets to Walt Disney, is considering setting up a technology investment fund. He has also stepped down as chairman of Sky following its recent sale to Comcast.

“The Tesla chairman job is perfect for James,” said one person briefed on the conversations. “He’s working on this fund and will be sitting next to Elon..he’s going to get access to so much deal flow.”

In a recent onstage interview at a Goldman Sachs conference, Mr Murdoch spoke warmly about Mr Musk and his experience as a Tesla director.

“It’s been a really fascinating experience,” Mr Murdoch said. “What’s exciting about the company and about Elon is the goals are so audacious. He’s an entrepreneur who has some really audacious goals about what can be created and what can be settled for.”

Mr Murdoch, who is a friend of Mr Musk, joined Tesla’s board last year as one of two new independent directors brought in to strengthen a group that has frequently been criticised for bowing to Mr Musk’s wishes. However, the appointments have had no effect on the mercurial Mr Musk this year, and Mr Murdoch has participated in recent decisions that have brought the board additional criticism.

Tesla directors, including Mr Murdoch, issued a ringing endorsement of Mr Musk after he first rejected a settlement of the SEC fraud charges, a move that was widely condemned by boardroom experts and wiped 14 per cent off the company’s share price.

The Tesla board has yet to make a final decision on the chairman and may also look to an external candidate although time is running out. Mr Musk has until mid-November to find a replacement having been given 45 days to step down as chairman when he agreed his settlement with the SEC last month.

However, the SEC agreement states that the 45-day deadline can be extended at the request of Mr Musk. – Copyright The Financial Times Limited 2018