Hamburg has already imposed bans and Frankfurt and Stuttgart to follow 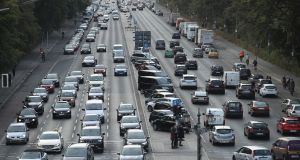 Berlin has been ordered to ban up to 200,000 older diesel vehicles from its inner city, the latest German metropolis to fall victim to long-term breaches of EU air quality.

The ban will apply to all vehicles – cars, vans and trucks – except those with the most modern Euro-6 emissions standard.

The ruling, which is to be appealed by Berlin’s state government, came after a case taken by German environment lobby group DUH.

“This was a good day for Berlin’s air,” said Jürgen Resch, head of the DUH.

The DUH has launched legal actions in all major German cities where air quality breaches EU standards. Hamburg has already imposed bans, while further diesel bans are looming next year in Frankfurt and Stuttgart.

Berlin diesel bans will apply from mid-2019 on two major east-west and north-south thoroughfares through the city, as well as side streets.

Only outright bans of older diesels on these streets, the court ruled, can guarantee Berlin’s state government meets air-quality standards.

“These limits should have been met for eight years already,” the court added in its ruling.

Exceptions for residents and delivery trucks must be presented to the court and the new regime must be in place by next June. The administrative court also said the new arrangements must ensure older diesels do not diver into side streets.

The Berlin ban comes a week after an emissions agreement between Germany’s federal government and car companies, including hardware retrofits and financial incentives for new cars.

That deal was criticised heavily as confused at best and ineffective at worst by environmental lobby groups and auto industry analysts.

Berlin’s city-state government argued that it had already introduced measures to improve air quality: software fixes, cleaner buses and 30km/h speed limits. But these were viewed as insufficient to improve air quality, the Berlin court said, noting that Berlin’s computer models consistently underestimated the levels of air pollution on the streets of the German capital.

“We have thousands of companies who will be hit massively by this, unsure if they can carry out their orders,” said Jörg Nolte of Berlin’s chamber of commerce. “It can’t be that supermarkets are empty in the affected streets.”

8 Summer tourist season at risk with Covid passports months away