Porsche ‘could be worth up to €70bn’ as separate company 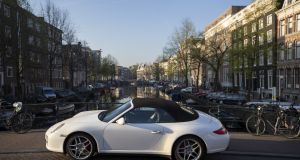 A white Porsche AG automobile sits parked on a bridge over a canal in Amsterdam, Netherlands.

Sports car producer Porsche could be worth up to €70 billion as a separately listed company and needs to think about ways to make itself more attractive to investors and partners, its chief financial Officer Lutz Meschke has said.

Ferrari and Aston Martin have benefited from listing and Porsche should think about ways it could make itself more attractive, Meschke told German newspaper Sueddeutsche Zeitung.

“Every company needs to think about whether it makes sense to create competitive divisions,” Meschke said in response to a question about the merits of a stock exchange listing.

Porsche AG could be worth between €60 billion to €70 billion, Meschke said, without explaining what he based that estimate on.

A spokeswoman for Porsche on Monday said the company is not currently pursuing plans for a listing. Parent company Volkswagen Group also said there were no plans to list the Stuttgart-based maker of the famous 911 sports car.

Analysts at Evercore ISI said a separate listing or spin out of Porsche AG is one of the most obvious ways for Volkswagen Group to unlock value.

“We believe VW’s wholly owned Porsche AG could conservatively be worth an incremental €27-49 billion to VW shareholders,” Evercore said.

The comments show the structural changes run deeper than VW has mapped out so far, and offer a rare insight into deliberations within VW’s top ranks.

Meschke said he has pointed out the benefits of a listing during internal discussions, but declined to say to what degree his view is shared by VW chief executive Herbert Diess or key stakeholders like the Porsche and Piech owner family.

“VW is one of the few carmakers whose management team is aware that actions are needed in the near-term in order to optimize the positioning of the company,” Evercore ISI analyst Arndt Ellinghorst said in note.

Partial listings of VW’s units are “one obvious way through which VW can prepare itself”.

VW chief Herbert Diess, continuing an asset review that started two years ago, has pledged to make the world’s biggest carmaker more efficient as the industry goes through a seismic shift to make electric cars with new digital features. – Reuters and Bloomberg