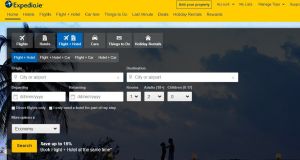 Ryanair has been suing Expedia for allegedly ‘screenscraping’ its fares.

Nasdaq-listed Expedia, one of the world’s biggest online travel agents, has launched a counterclaim against Ryanair in a US court that accuses it of trying to “destroy” competition by leveraging a “monopoly” position on some routes.

Ryanair has been suing Expedia, which has annual revenues of $10 billion (€8.65 billion) and owns brands such as Travelocity and Hotels. com, in a Seattle court for allegedly “screenscraping” its fares.

Ryanair alleges Expedia resells Ryanair fares without permission. The case has taken Ryanair’s long-running crusade against alleged screenscrapers in Europe to a new level, bringing its fight to a US court for the first time in what is likely to be the airline’s biggest ever commercial lawsuit.

Expedia has been trying for months to get Ryanair’s case thrown out of the US court on the basis that it has already been sued in Dublin. In recent weeks, however, the online travel behemoth has opened a new front with its counterclaim.

In legal filings, Expedia has accused Ryanair of trying to wipe out its competition for holiday package deals that include Ryanair flights, hotels and hire cars.

The US tech giant said it began reselling Ryanair flights in 2013 with no objections from the airline, often as part of package deals that also included hire cars and hotels. It said Ryanair had no reason to object, because it always passed on the full cost of the flights.

Expedia alleges that everything changed in September 2016, when Michael O’Leary, Ryanair’s chief executive, personally told an unnamed Expedia executive “that Ryanair would not agree to any business arrangement under which Expedia would continue to sell travel packages that include Ryanair flights”.

In December 2016, Expedia said, Ryanair then launched a new brand, Ryanair Holidays, which sold flights on the Ryanair.com website as part of package deals with cars and hotels.

Expedia alleges Mr O’Leary wouldn’t do a deal with Expedia because he wanted to take some of its business on package deals.

Expedia said its website customers, who wanted to book package deals on any one of 2,000 European city-pair routes, on which it alleges Ryanair had a “monopoly” for the flights, were no longer able to do so, because Ryanair would no longer give Expedia the flights.

It alleges this is “anticompetitive”, because the only way Expedia can continue to sell package deals on those routes would be to set up its own airline, in the absence of a deal with Ryanair.

Expedia is asking the Seattle court to award it treble damages for the business it claims it has lost over Ryanair’s alleged “anticompetitive” behaviour.

It also wants the court to direct Ryanair to axe the restrictions that it introduced to prevent third-party package agents, which could potentially complicate Ryanair’s strategy for trying to win more package deal business.