Move comes hours after carmaker’s headquarters is raided by authorities 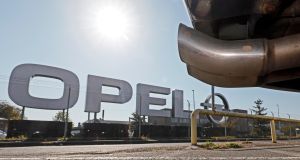 Opel said it is “fully co-operating with the authorities”. Photograph: PA

Germany’s transport ministry issued a recall of nearly 100,000 Opel cars on Monday, just hours after the carmaker’s headquarters was raided by authorities on suspicion that some of its diesel-engine cars were equipped with software designed to manipulate emissions.

Opel, which said it is “fully co-operating with the authorities”, acknowledged that public prosecutors from Frankfurt searched its headquarters in Ruesselsheim, near the Frankfurt airport, along with its factory in Kaiserslautern, in southwest Germany. It said it could not comment on details but reaffirmed that its vehicles comply with the applicable regulations.

The transport ministry said in a statement that the illegal “defeat device” software was discovered earlier this year. It was seeking to recall Cascada, Insignia and Zafira models across Europe.

Since the Volkswagen diesel scandal first emerged three years ago, other German carmakers including Daimler have been forced to recall cars.

In prior statements Opel has acknowledged that its engine control units were programmed to shut off at certain temperatures, but it said such practices were fully compliant with the law. Opel was purchased by French carmaker PSA last year, from General Motors, for €1.3 billion.

The initial scandal over manipulation of diesel emissions dates back to an admission by Volkswagen Group that it fitted devices to its vehicles to cheat US emissions tests.

The scandal has cost the VW Group several billion, and in the latest twist, there are reports from Germany that the car giant is considering a stock market listing for its sports car producer Porsche. The prestigious brand could be worth up to €70 billion as a separately listed company, its chief financial officer Lutz Meschke has said.

Ferrari and Aston Martin have benefited from listing and Porsche should think about ways it could make itself more attractive, Mr Meschke told German newspaper Sueddeutsche Zeitung.

“Every company needs to think about whether it makes sense to create competitive divisions,” Mr Meschke said in response to a question about the merits of a stock exchange listing.

Porsche could be worth between €60 billion to €70 billion, Mr Meschke said, without explaining on what he based that estimate.

A spokeswoman for Porsche on Monday said the company is not currently pursuing plans for a listing. Parent company Volkswagen also said there were no plans to list the Stuttgart-based maker of the famous 911 sports car.

Analysts at Evercore ISI said a separate listing or spin out of Porsche is one of the most obvious ways for Volkswagen to unlock value. “We believe VW’s wholly owned Porsche could conservatively be worth an incremental €27-€49 billion to VW shareholders,” Evercore said.

The comments show the structural changes run deeper than VW has mapped out so far, and offer a rare insight into deliberations within VW’s top ranks.

Meschke said he has pointed out the benefits of a listing during internal discussions, but declined to say to what degree his view is shared by VW chief executive Herbert Diess or key stakeholders like the Porsche and Piech owner family. – Reuters/Bloomberg/Copyright The Financial Times Limited 2018