Pilot groups call Ryanair base closures a ‘declaration of war’ 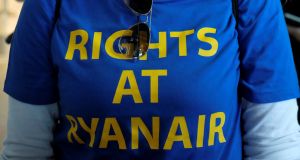 Moves by Ryanair to close bases in some parts of Europe represent a “declaration of war”, union leaders say.

The leadership of the pilot groups said base closures and fleet reductions by the airline were “perceived in some quarters as a punishment for the lawful industrial actions by pilots and cabin crew”.

They said there was concern this would “seriously exacerbate the recent deterioration in the relationship between the airline and its pilots and cabin crew, which has already seen strike action in some countries”.

In a statement on behalf of union leaders across the Continent, the president of the European Cockpit Association, Dirk Polloczek, said: “Pilot associations demand the immediate withdrawal of the base closures in Eindhoven and Bremen and downsizing of the Niederrhein base.

“We call on Ryanair management and its board of directors to change its confrontational and counterproductive approach. It is hard to see how Ryanair can realistically expect to reach agreements with its unions with such threats hanging in the air.”

Martin Locher, president of German association Vereinigung Cockpit, said taking actions that forced pilots and cabin crew to relocate or lose their jobs and income was definitely not what was needed to build trust and a solid basis for constructive negotiations.

“If Ryanair is serious about reaching agreements by Christmas, such behaviour is very unhelpful. The announced base closure date of November 5th will be a milestone to test management’s real intentions and its willingness to actually do something for its employees, be it in Germany, be it elsewhere.”

Arthur van den Hudding, president of Dutch pilots’ association VNV, said closing down a base and moving employees to a different country was not compatible with social dialogue.

“We see it as a declaration of war, and totally contrary to all claims to be willing to negotiate.

“If Ryanair management thinks that closing bases is a quick and cheap fix for the employee unrest – and the legal court cases against it here in the Netherlands – they would appear to be naive at best and antagonistic at worst,” he added.

Mr Van den Hudding said instilling fear among workers would not be tolerated.

“We call on Ryanair to maintain their base in the Netherlands, to face their responsibilities and to come back to the negotiating table, rather than running away and punishing everybody left behind,” he said.

Communications manager Kenny Jacobs said the closure of two Ryanair bases in Eindhoven and Bremen, and a reduction in aircraft at Niederrhein, was “a small but necessary response to these adverse circumstances”.

He also warned of further base closures and/or capacity cuts in Germany and elsewhere should oil prices continue to rise while fares fall.

“These regrettable closures are due to adverse market conditions, and we dismiss these false claims made by Lufthansa pilots under the banner of the ECA,” said Mr Jacobs.