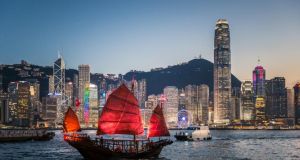 June in Dublin Airport is going to be all about the East and in particular China. After years of talk about the need for a China flight, two Chinese airlines will begin services in the same month. Cathay Pacific announced a few months ago a service to Hong Kong from Dublin, and on Wednesday Hainan Airlines announced they will begin a Beijing service in June too. The direct Beijing-Dublin flights will operate on Thursdays and Sundays, while the Beijing-Edinburgh-Dublin service will operate on Tuesdays and Saturdays. Hong Kong flag carrier Cathay Pacific will operate four direct flights between Dublin and Hong Kong.

Good news for business travellers to London City Airport. Flybe will begin flights between George Best Belfast City Airport and London city. Flights will operate up to six times a day from May 7th.

Flights to Belfast International had been badly hit lately when Ryanair withdrew services. However, Ryanair services returned on March 1st flying from Stansted.

It is a week of announcements, with Ryanair beginning services to Turkey for the first time from Dublin, and to Bratislava. Both routes will operate once a week from June and flights are on sale now.

Leveraging the global profile of St Patrick’s Day, Fáilte Ireland have made a video to showcase all that is great about the Irish welcome. The campaign is to target business travel to Ireland and to persuade meeting planners to host events in Ireland. Business and incentive travel is worth an estimated €42 million to the economy. The most recent conference win was the European Aquaculture Society 2020 meeting, which will bring 1,200 delegates to Cork. See the video here