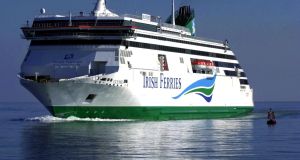 Despite revenue growth of 3 per cent to €335.1 million on the back of volume growth across the group’s operations, earnings before interest, taxes, depreciation and amortisation fell to €81 million.

Company chairman John B McGuckian flagged the year as a successful one before noting group fuel costs increased by 25.2 per cent to €40.3 million.

Early in the financial year Irish Continental sold its MV Kaitaki which yielded a profit after tax of €24.9 million. Early this year the company sold its Jonathan Swift vessel.

Additionally, the company entered into an agreement this year for a new ferry, which will cost €165.2 million, that will be delivered to the group in 2020 and will be used on the company’s Dublin to Holyhead services.

Although the company’s EBITDA performance won’t thrill shareholders, it was ahead of analyst expectations while profit before tax increased by 45 per cent to €87.8 million. Additionally, the company has moved from a €37.9 million net debt position in 2016 to a net cash position of €39.6 million last year.

Irish continental operates in two divisions; the ferries division which offers passenger and roll-on roll-off freight services, and the container and terminal division.

Despite Brexit associated headwinds, the overall car market to and from the Republic of Ireland grew by around 1.7 per cent in 2017 to 807,400 cars. Irish Ferries’ car carryings “performed strongly”, up 2.4 per cent to 424,000 cars. The company carried 1.65 million passengers in the period, up 1.7 per cent, thus outperforming growth in the wider market where numbers edged up 1 per cent to 3.13 million passengers.

Container volumes shipped in the year also increased 5.9 per cent.

The company has decided to increase its dividend payment to shareholders by 5 per cent this year to 8.15 cent per share. Subject to approval, that will be paid in June 2018.

In terms of future outlook, the company suggests conditions are still favourable, although it noted it had suffered as a result of bad weather up to March 3rd this year with conventional sailings down 9 per cent year-on-year.

“We look forward to another year of volume growth in our markets of operation. The Group is also set to benefit this year from the introduction of the new cruise ferry MV WB Yeats in the summer of 2018 which will bring additional earnings potential for the Group,” Mr McGuckian said.

Analysts were broadly positive on the results with Investec Analyst Gerard Moore saying the WB Yeats, alongside the ship set for delivery in 2020, “provides ICG an impressive platform for future growth”. Following the disposal of the Jonathan Swift, Mr Moore forecast 2018 year end net debt to fall to 55 million from a previously estimated €65 million.