Cathay Pacific gets some respite from earnings woes 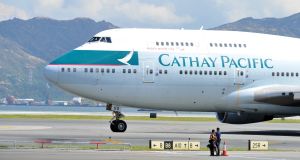 Cathay Pacific Airways is finally seeing some respite from its earnings woes.

Asia’s biggest international carrier reported a surprise profit in the second half of 2017, with a pick-up in cargo and premium-travel demand helping narrow the full-year net loss to HK$1.26 billion ($161 million).

That’s well below analysts’ expectations for a loss of HK$2.26 billion, based on estimates compiled by Bloomberg.

The airline last year announced direct flights between Dublin and Hong Kong. The Consul General of Ireland in Hong Kong Peter Ryan said last month the new routes would open up significant regions in China to Ireland for tourism and business.

Ten months in the job, chief executive officer Rupert Hogg can reassure investors that a rebound in business travel and cargo demand have contained the damage caused by past fuel-hedging contracts gone awry.

Mr Hogg also has cut 600 jobs as part of a three-year revamp, and taken delivery of newer aircraft to help Cathay become more competitive against low-cost and Chinese mainland carriers.

“The outlook for our cargo business is positive,” chairman John Slosar said in a statement on Wednesday. “Our priorities for 2018 are our transformation program, changing the way that we work so as to better contain costs which will strengthen our passenger business further.”

Cathay ferried 11 per cent more cargo for the full year, while the number of passengers carried increased 1.4 per cent.

Cargo yield - a key indicator of profitability reflected by earnings from carrying one ton per kilometer - jumped 11 per cent. A slower rate of decline in passenger yields also supported the improved result.

“The surprise in the second-half profit was due to cargo business,” said Mohshin Aziz, an analyst at Maybank Investment Bank Bhd in Kuala Lumpur. “Cargo performed far better than what was expected. Passenger yield is still in pain.”

Cathay recorded profit of HK$792 million for the second half, helped by increased earnings from associates including Air China, in which it owns 18 per cent. The Hong Kong-based carrier posted a loss of HK$928 million in the second half of 2016.

Shares of Cathay recovered from losses in the morning trading session and climbed as much as 3.2 per cent to HK$14.22 in Hong Kong, the highest intraday price since November 2015.

“Cargo is highly cyclical and they are heavily dependent on cargo,” said an analyst at UOB Kay Hian Pte in Singapore. “There’s concern whether this is sustainable” given uncertainties due to a possible trade war after the U.S. increased tariffs on aluminum and steel, he said.

Cathay said losses from wrong-way fuel bets amounted to HK$6.4 billion for the whole of last year, narrowing from HK$8.46 billion in 2016.

Fuel is the largest component of an airline’s costs in Asia. Cathay has been booking losses on its hedges after crude oil unexpectedly tumbled from more than $100 a barrel in 2015.

The carrier has since shortened the contracts’ lock-in period to two years from four. As part of the three-year plan kicked off last year, Cathay is on track to cut costs by HK$4 billion, Slosar said in January.

The company has been in talks with its pilots over compensation, frozen pay for senior staff, and increased the number of economy seats on some planes as part of its efforts. -Bloomberg