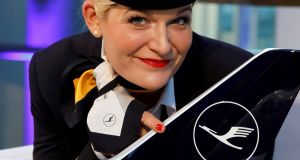 German airline group Lufthansa said it expected pricing this year to be stable and predicted slightly lower profit, after it reported record annual earnings for the third year in a row.

Lufthansa is currently benefiting from low fuel prices, strong demand and last year’s collapse of local rival Air Berlin, helping to drive passengers to services offered by its namesake carrier and other units such as Eurowings, Austrian and Swiss.

The group reported 2017 adjusted earnings before interest and tax up 70 percent to €2.97 billion, better than average analyst expectations of€ 2.84 billion, according to a Reuters poll.

“You get very few years in this industry where you see that going up to that extent,” chief financial officer Ulrik Svensson said. - Reuters

1 Fianna Fáil may have just pressed the pause button on the property market
2 UK to prioritise EU trade deal over one with United States
3 Who are Ireland’s 17 billionaires?
4 Are there annual limits on inheritances or gifts to a child?
5 Eason puts Blanchardstown store on market at €16m
6 My father in a nursing home wants to gift me his house
7 CVC must reveal Six Nations interest before Pro14 bid
8 State ranked highly for attracting skilled workers but low on gender equality
9 American YouTubers embrace the crisp sandwich
10 London fintech company Nuroco to expand here
Real news has value SUBSCRIBE