Airline will fly two routes to Dalaman from Dublin and Bratislava 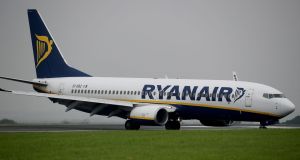 Ryanair spokesman said the airline was ‘pleased’ to enter the Turkish market.

Ryanair has announced its first flights to Turkey with two new routes to Dalaman from Dublin and Bratislava.

Both routes will operate once a week from June, as part of the airline’s summer 2018 schedule, and go on sale on Thursday.

“Ryanair is pleased to announce our entry into the Turkish market, initially with two routes to Dalaman from Dublin and Bratislava commencing in June,” said a spokesman for the airline.

“To celebrate we are releasing seats for sale from €39.99 for travel from June, which are available for booking until midnight on Friday, March 16th.”

The long-time chief executive of the airline is estimated to be worth $1.1 billion (€886 million), with the bulk of his wealth coming from his holding in the airline. He is the third-largest investor in the listed group with a 3.91 per cent stake.