Irish motor trade hits back at criticism of PCP finance 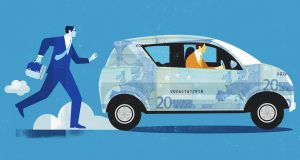 The Irish motor trade has responded to the release of the Competition and Consumer Protection Commission (CCPC)’s report into the use of Personal Contract Purchase (PCP) finance, and many do not like what they see.

The CCPC’s report pointed out that there are potential shortfalls both in consumer knowledge of how PCPs function, and in the regulation of the sale of such products. Concerns were also raised over the levels of training and knowledge amongst car dealer staff when it comes to the selling of financial products, rather than motoring ones, and the CCPC has called, among other things, for PCP sales to be regulated under the Consumer Credit Act.

One who responded was Eddie Murphy, former managing director and chairperson of Ford in Ireland, who said that “for sure, a lot of the CCPC recommendations will provide a better template but let’s not throw out the baby with the bath water. PCPs are a good solution for a lot of customers, for dealers, for distributors, and for finance houses, so stop giving the product a bad name.”

Ray Murphy, a director at First Auto Finance said that there was “plenty for the industry to take from the report and look to improve. I found the results from the focus groups really interesting. I’m not sure too many observers got that far though, despite looking for consumers who’ve had bad experiences with PCP, the responses given were overwhelmingly positive.”

Other commentators were less judicious. One motor trade professional responded to the report by saying “the report feels as though it itself was put together by a group of people who seem to have a poor understanding of the motor industry, both in this country and the UK. It almost reads halfheartedly. PCP has been around for a very long time in the motor industry worldwide. Albeit, it is relatively new to these shores, surely if there was a “flaw in the system” it would have presented itself by now?”

Responding in more measured tones that some, Volkswagen Financial Services Ireland, the ‘tied’ bank that lends both PCP and Hire Purchase money to those buying a Volkswagen, Audi, Seat, or Skoda, said that it welcomed the CCPC report, and that it was making continuous investments in staff training “to ensure that customers are professionally served and are in the strongest position to make an informed decision regarding the most appropriate choice of finance product for them.”

Director of VWFSI Mike Todd said: “We were delighted to have the opportunity to contribute to the CCPC’s report on our PCP product and how it is sold through the VW Group Ireland dealer network. Our customers have the added benefit of a guaranteed minimum future value, where we take the residual value risk, providing a degree of consumer protection regarding any uncertainty surrounding the future value of used cars.

“Based on many years’ experience of providing PCPs to customers VWFSI has high levels of both repeat purchase and customer satisfaction and therefore look forward to working on future initiatives to further enhance consumer’s awareness and understanding of PCPs.”

The broad response of the motor trade to the report has been to say that as long as customers are happy (and the CCPC report agrees that they are) then there is little cause for concern.

Standing by its concerns

The CCPC, responding to criticisms of the report, said that it stands by its concerns, and its recommendations to Government. It has highlighted the fact ththat while a typical Hire Purchase deal can leave a customer out of pocket if used values should slip, the difference is that under such deals, the customer gets to choose when and how to sell on the car. With a PCP deal, they have no choice.”

A CCPC spokesperson told The Irish Times: “the CCPC’s report and the resulting recommendations are based on extensive research. This included detailed questionnaires issued to all financial institutions that underwrite PCP finance. Detailed questionnaires were issued to all of the car dealer credit intermediaries on the CCPC register, resulting in 85 responses, 61 of which were from car dealers who arrange PCP finance. In-depth interviews were conducted with a number of the larger car dealerships in the State, Amárach Research undertook a series of focus groups with consumers and we reviewed information provided by contacts to the CCPC’s consumer helpline, the CCPC requested submissions from individual consumers regarding their views of and experience with PCP products. A total of 17 submissions were received and nine in-depth interviews were conducted.”

The CCPC also pointed out that when a consumer arranges a loan through a financial institution, such as a retail bank or credit union, the financial institution must carry out credit and suitability checks in order to comply with the Central Bank’s Consumer Protection Code.

On the other hand, should a consumer enter into a PCP agreement, which may even be underwritten by one of those same financial institutions, this is not covered by the provisions of the Code. This means PCP’s fall outside of the protections which are afforded to consumers of other financial products and given the significant volumes of credit involved the CCPC said that it believes that consumers should be equally protected.

The essential problem is that while PCP is sold as a straightforward form of finance, it’s actually a gamble. Buyers, dealers, and importers alike are betting that the predicted future value of the car will not only be correct, but that it will be sufficiently prudent that there will be extra equity left over to act as a deposit for the next purchase. It’s a gamble that, according to the CCPC report, many do not realise they are making.