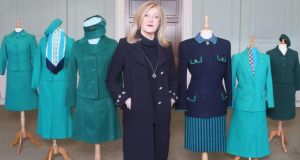 Irish fashion designer Louise Kennedy with a range of former Aer Lingus crew uniforms. Ms Kennedy has been engaged by Aer Lingus to create a new design for its uniform. Photograph: Leon Farrell/Photocall

After 20 years in teal green uniforms, Aer Lingus crew are set to get a fashion upgrade. Irish designer Louise Kennedy has been engaged to create a new design for the airline’s frontline ground agents and cabin crew.

Its current uniform – also designed by Ms Kennedy – first took to the runway in 1998. The designer said she was “thrilled” to be asked by Aer Lingus to create a new design for staff. “To be able to now design a brand-new uniform for the airline is an opportunity we very much appreciate and relish,” she said.

Aer Lingus said the “key objective” was to create a “contemporary uniform that will retain its modern look over time and will best meet the needs of today’s airline staff”.

The airline’s chief operating officer, Mike Rutter, expressed the hope that the redesign would “make ripples not just within our own airline but throughout Ireland and far beyond”.

Designed by Sybil Connolly of Pimms in 1945, Aer Lingus’s first uniform was a military-style rich brown suit. It became green in 1948, with a two-piece tweed suit comprised of a skirt and jacket, and a cream blouse.