Commercial terminal traffic is up for Dublin and Cork, but Shannon shows a decline 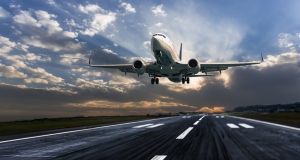 The figures showed an increase of 0.6 per cent in traffic flying over the country during the month, while north Atlantic communications flights - Europe and North America flights - was up 0.3 per cent year on year.

Overall, commercial terminal traffic for Shannon, Dublin and Cork airports was up by 2.5 per cent

Commercial terminal flights at Dublin rose 2.6 per cent to an average of 516 daily movements, with Cork showing a 4 per cent increase to 46 on average each day.

However, commercial flights at Shannon showed a decline of 1.2 per cent to an average of 43 daily.

“These are positive figures for February,” said Peter Kearney, IAA chief executive designate. “Aviation continues to open Ireland up to the world and management of air traffic growth is a key driver for our economy.”

1 ‘I don’t need to do any of this. . .I don’t actually need to work.’
2 Direct sea routes to Europe offer certainty in choppy Brexit waters
3 Admission of mistake in Oxford vaccine dose raises doubts over reliability
4 Only way is up for Stripe as valuation skyrockets
5 Promontoria barred from pursuing doctor over Ulster Bank loan
6 Anti-alcohol zeal of public health experts peppers reopening debate
7 Basic income for all: Has the Covid crisis given us a new economic model?
8 Pandemic brings a halt to Zara-owner’s Irish expansion
9 Fiona Reddan: Who’s afraid of Revolut? Not AIB and BOI it seems
10 Online shoppers face unwelcome tax surprise
Real news has value SUBSCRIBE