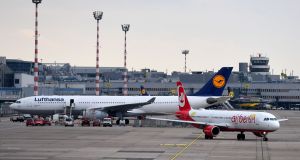 Lufthansa has been awarded the only five-star rating in Europe by aviation consulting specialist Skytrax. Photograph: Patrik Stollarz/AFP/Getty Images

Lufthansa Miles & More award miles to be based on price

Lufthansa is changing how the frequent flyer programmes Miles & More award miles are assigned. Up to now, the assignment of miles was based on the class of carriage and distance flown but from March 2018, miles will be assigned on the price of the ticket.

The three largest US carriers, United, American Airlines and Delta have already changed their rewards programmes to be based on price. Regular travellers who used to fly the long way round to accumulate miles, can now get home quicker.

Lufthansa has been awarded the only five-star rating in Europe by aviation consulting specialist Skytrax. Lufthansa is now in a select group of 10 airlines that have this coveted rating. The Lufthansa first-class service has been rated five stars for years but now the whole airline is to carry the five-star certification. The other five-star airlines are All Nippon Airways, Asiana Airlines, Cathay Pacific Airways, Etihad Airways, EVA Air, Garuda Indonesia, Hainan Airlines, Qatar Airways and Singapore Airlines.

British Airways has become the first airline to trial biometric boarding technology on international flights departing the United States. The partnership with Los Angeles International Airport removes the need for passengers to show their passport or boarding pass at the gate, with the technology “recognising their unique facial features, and reconciling them with the digital facial scan taken as part of the immigration process”.

BA says the “exclusive trial” will significantly reduce the amount of time it takes to board an aircraft, with passengers only needing to present passports and boarding passes at check-in and security.

British Airways has announced it will launch a new weekly summer service from Dublin to Manchester from May 2018, increasing the airline’s flight frequency from Dublin Airport from 32 to 36 flights a week. The airline is recruiting 20 pilots and 20 cabin staff for its new aircraft, the 98-seat Embraer 190.