Bombardier deal with Airbus ‘could create 500 US jobs’ 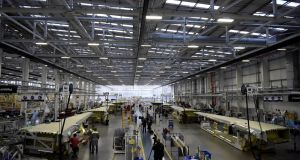 Bombardier has told the United States International Trade Commission that its new partnership with Airbus to build CSeries planes could deliver around $300 million in new foreign direct investment and create potentially 500 jobs for the US.

The Canadian aerospace group and its rival Boeing appeared before the US International Trade Commission (USITC) on Monday in Washington to plead their respective cases in an increasingly bitter industry dispute which unions claim could have far reaching effects for Bombardier’s 4,000 strong workforce in the North.

The USITC held what it termed a “fact-gathering” hearing yesterday as part of its ongoing “antidumping and countervailing duty investigations”.

These were initially sparked by Boeing after it complained that Bombardier had won a significant order with Delta Airlines because it had agreed to sell its CSeries “significantly below cost price” to Delta.

The Canadian group refutes this.

But the US Commerce Department sided with Boeing and has proposed imposing new trade tariffs of 300 per cent on every Bombardier CSeries jet sold in America - the final decision on these tariffs, however, rests with the USITC.

At stake is the fact that the 300 per cent tariff could more than triple the price of each CSeries plane in the US which could make the plane virtually unsellable in a vitally important market.

This is why Bombardier is so desperate to persuade the USITC to see its side of the argument.

The commission said no decision would be made on Monday but that it would take testimony and gather the information it required to make its final determinations.

According to USITC its “final injury vote will take place in late January”.

Both Bombardier and Boeing delivered a vigorous defence of their respective positions to the commission on Monday.

Mike Nadolski, Bombardier’s vice president communications and public affairs said its evidence demonstrated that Boeing’s petition was an “unfounded assault on airlines, the flying public, and the US aerospace industry”.

Mr Nadolski stressed that the Bombardier and Airbus C Series partnership would include the construction of a new US manufacturing facility in Alabama bringing with it jobs and investment.

“This facility will provide US airlines with a US-built plane thereby eliminating any possibility of Boeing being harmed by imports,” he added.

Bombardier also emphasised that it firmly believed that the CSeries aircraft posed no threat to Boeing on two counts.

“Boeing did not compete in the Delta campaign. It has not made a plane sized to Delta’s needs for many years, since it stopped producing the 717 and 737-600.

“Moreover, Boeing has acknowledged that it has oversold its 737 production capabilities and has a backlog of more than 4,300 aircraft orders,” he said.

Boeing however continues to maintain that Bombardier engaged in “illegal business practices with its C Series aircraft” and that this “harmed US domestic industry”.

“Boeing brought this case seeking enforcement of US trade law, which mirrors the widely-accepted rules of international trade adopted by most WTO member nations, including Canada,” it stated after the USITC hearing.

“Bombardier’s conduct is flatly inconsistent with US trade law, and it has caused severe harm to Boeing, its employees, and its suppliers.”

4 Nearly a quarter of workers will operate remotely after pandemic