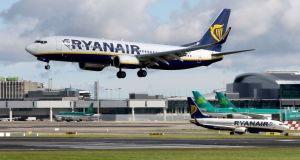 Ryanair said it had also submitted a set of proposals on pay and conditions for its Irish-based pilots. Photograph: AFP

Ryanair faced its first union-led pilots’ strike in Germany on Friday as threats of industrial action at its Irish airports over Christmas or new year were finally lifted.

German pilot union VC said it would call all directly employed Ryanair pilots at the country’s airports out on strike between 5:01 and 8:59 local time. Only German-based Ryanair pilots will strike, hitting an estimated 16 flights from the airline’s bases there. None appears to be operating into Ireland.

Ryanair chief operations officer Peter Bellew said that the company intended to operate its schedule as planned, while spokesman Robin Kiely advised customers in Germany to turn up as normal on Friday.

News of VC’s action came as trade union Impact called off the threat of a strike at Irish airports after Ryanair pledged in writing to recognise the organisation ahead of a noon deadline on Thursday.

About 117 members of the Irish Airline Pilots’ Association – part of Impact – had been threatening to strike at Cork, Dublin and Shannon airports if the airline had not met the deadline.

The union said the “danger of industrial action had receded for the present” after it received written confirmation from Ryanair that the airline recognised Impact.

A Ryanair pilots’ strike at Irish airports now requires a fresh ballot and for the union to serve seven days’ notice on the company, ruling out any industrial action over the Christmas or new year period.

Ryanair said it had submitted a set of proposals on pay and conditions, procedures and dispute resolution for its Irish-based pilots. The pair will meet on January 3rd.

Meanwhile, VC claimed that Ryanair cancelled talks between the pair because the airline did not want to deal with two of the union’s company council members who were present.

“This makes it clear to VC that the company is not interested in a mutually constructive co-operation,” he said.

Ryanair said that the strike was unjustified and unnecessary as the company had written to VC early on Thursday agreeing to meet the union in Frankfurt on January 5th.

The airline argued that VC was bidding to “impose a non-elected, non-Ryanair pilot, who is currently suing the airline” on its Ryanair pilots’ council.

It is understood the airline sacked the representative at the centre of the row for an alleged security breach. The pilot is contesting this in a court action against Ryanair.

Why is loyalty punished when it comes to Irish mortgages? 05:30
Tallaght site with full planning for 196 rental apartments seeks €7.35m 05:30
Nearly a quarter of workers will operate remotely after pandemic 05:21
Ibec calls for additional €70bn spend on vital infrastructure 05:18
Prime pitch on Galway’s Shop Street guiding at €1.6m 05:00

7 Nearly a quarter of workers will operate remotely after pandemic