Airline describes meeting with German union as ‘cordial and productive’ 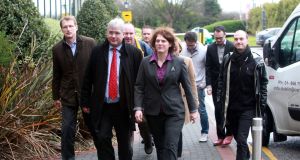 The threat of a Ryanair strike continued to hover over Irish airports on Wednesday as the airline said it would respond “comprehensively” to pilot union Impact’s demand that it conclude a recognition agreement by noon on Thursday.

The Irish Airline Pilots’ Association (Ialpa) – part of trade union Impact – warned, following a meeting this week, that it could still act on its mandate for a strike at Cork, Dublin and Shannon airports if a deal is not agreed by the Thursday deadline.

Ryanair’s chief people officer, Eddie Wilson, confirmed that the airline would “respond comprehensively” to the union’s demand. “I think that they will be reassured by that,” he said.

Newly appointed chief operations officer, Peter Bellew, wrote to pilots on Wednesday saying that Ryanair had told Impact that it was recognising the union for collective bargaining.

“We confirmed that we would write back tomorrow (21st December) on recognition and the pay proposals we put forward at the meeting,” Mr Bellew’s note says.

He represented Ryanair alongside Mr Wilson at union meetings with both Irish and German pilots this week.

If Impact-Ialpa is not happy with the airline’s response, it can issue a seven-day strike notice, raising the possibility that Irish Ryanair passengers could face disruption next week, between Christmas and the New Year.

Mr Wilson was speaking following a meeting with German pilots’ union, VC, that he described as cordial and productive.

He noted that the company did not meet VC’s Ryanair company council, as the airline maintains that one of its members is not a pilot with the carrier. There is a dispute over this.

VC’s director of international affairs, James Phillips, said that the German pilots’ union would not comment on the meeting’s outcome until it had spoken to its members.

The union also has a mandate for strike that it can exercise with just 24 hours notice, although it has pledged to take no action between December 23rd and 26th.

Ahead of the meeting, Mr Phillips warned that many members were unhappy that the union called off a strike scheduled for Wednesday “because there is a lot of frustration and a lot of anger”.

He described as “unfortunate” reports that Ryanair chief executive, Michael O’Leary, had said the airline would still move aircraft around if unions were being unreasonable.

Mr Phillips noted the union may not drop its threat to strike until the union and Ryanair have agreed and signed a contract governing the union’s recognition, which could take two months.

“If negotiations are continuing in good faith and we are making good progress, we will obviously not be taking industrial action,” he added.

Meanwhile, the British parliament’s business, work and pensions select committees said they have written to O’Leary following claims that staff were underpaid, had to pay for their own uniforms and incurred fees when they left the airline.