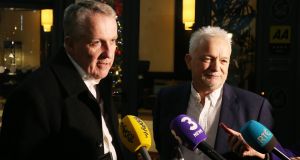 Ryanair is fully committed to making peace with staff unions, chief operations officer Peter Bellew said ahead of a meeting with pilot representatives on Tuesday.

Mr Bellew led Ryanair management into a meeting with pilots’ union, Impact, on Tuesday, in a first step to recognising labour groups at the airline in a bid to avert strikes in Ireland and Europe this week.

Speaking before the meeting Mr Bellew acknowledged that Ryanair was adapting to “a new reality” in dealing with its workers.

He estimated that the move would cost the airline €100 million extra a year.

He pointed out that Ryanair was sincere about embracing the collective bargaining model. “We would not be here if we were not,” he said.

Mr Bellew spoke shortly after Impact spokesman, Bernard Harbor, warned that threatened strikes at Irish and European airports were not fully off the table until the union got “something concrete” from Ryanair.

“We want them to put flesh on the bones of what they say when they say we are going to recognise unions,” he said.

Impact has suspended a pilots’ strike at Dublin, Cork and Dublin airports pending the outcome of Tuesday’s talks.

If those talks fail, the union could issue issue a fresh seven-day notice to Ryanair, leading to possible industrial action in the days following Christmas next week.

Ryanair’s announcement that it planned to recognise unions took observers and the markets by surprise last weekend.

Its value sank by more than €2 billion between Friday and Monday following the news.

However, Mr Bellew estimated that the move to recognise unions, including those representing cabin crew, would cost the airline about €100 million extra a-year.

That amounts to around 80 cent a ticket on the basis that Ryanair will carry close to 130 million passengers in its current financial year, which ends on March 31.

Mr Bellew noted that the airline would not be changing its forecast that the business would make between €1.3 and €1.35 billion.

Ryanair is due to meet German pilots’ union VC on Wednesday and the Portuguese equivalent on Thursday.