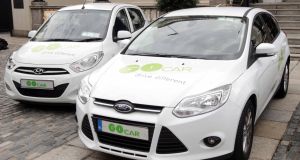 Irish car sharing company GoCar is offering motorists the chance to trade in their old or unused vehicle in exchange for credit to use vehicles on its shared fleet.

According to the firm’s website: “We’re looking for people who are willing to sell us their cars for the value in GoCar credit”. It gives an example where your car is valued at €2,000, the firms takes your car and give you €2,000 credit on a GoCar account.

To avail of the new scrappage service, owners share their vehicle details with GoCar on their website, along with the owner’s estimate of the vehicle’s scrappage value. GoCar review scrappage submissions and make an offer of car sharing credit which can be used across the full GoCar vehicle range including car, van and electric fleet.

According to GoCar managing director Colm Brady: “We’re delighted to launch GoCar Scrappage ahead of 2018 - the new year is always a time for positive resolutions and fresh starts and we hope to help as many drivers as possible who are currently wasting money on cars that are old and out of use by offering them a sustainable and cost-effective alternative in the form of car sharing.”

“It’s intersting listening to the customers in the call centres, who are saying ‘it’s time for me to join now’, because the car might have failed the NCT, or they’ve moved jobs. But we reckon one of the things holding people back from joining us is that they’re lumbered with a car and they don’t know how to sell it. They might normally do a trade-in for another car and they feel they wouldn’t know how to sell a car privately, so we are trying to make it a little easier for people - and we’ll look after the disposal,” says Brady.

GoCar was launched in 2008 and now has over 240 vehicles on its fleet, available from 170 bases across 18 counties in the Republic. The firm says it is adding 200 new 181-registered vehicles to its fleet from January.

Earlier this year it announced new partnerships with Irish Rail and local authorities, expanding services beyond Dublin and Cork to include Galway, Limerick, Kildare, Kilkenny, Waterford and Wicklow. It also announced a further €6 million investment to bringing the total number of GoCars to over 600 across Ireland.

Brady also reckons changes to the planning guidelines in relation to apartment buildings, announced on Monday by the Minister for Housing Eoghan Murphy, offers significant growth opportunities for car sharing schemes. The changes include the removal of a requirement to have car-parking spaces.

“This could be massive for us: it could end up with some locations having 50 to 100 cars servicing large developments. We also see further growth in the corporate market, where we manage a company’s staff cars and use the technology to make the most of a pool of vehicles dedicated to one firm.”

The one-off joining fee is €10, with no further subscription fees. Rates start from €8 per hour with the first 50km of fuel included in each trip. Any distance driven over 50km is charged at 50c per km, but if you notify GoCar in advance they can offer 10c per km.